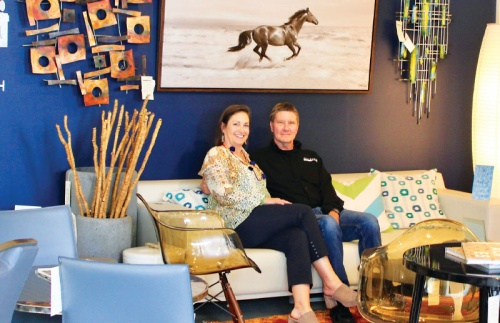 Collectic Home LLC aims to mirror Austin, a collection of eclectic beauty, which is exactly where the made-up, word-combining name comes from.

“We wanted to commensurate with the area and the demographics and do something locals would love,” said Greg Greeson, who co-owns Collectic with his wife, Joni. “Once people understand the name, they always remember it.”

Greg said his Rollingwood shop, which has been open about 10 years, is great for displaying furniture because of its open floor plan and natural light.

The Greesons left the ceiling pipes and beams exposed but painted them all an off-white color.

The couple’s adventure in the furniture business was established with their relationship in 1980.

Joni had just graduated college and was in the process of moving into her first apartment. Meanwhile, Greg was a year into running Eurway, one of the only furniture shops open on Sunday, Joni’s single day off work.

“I walked in to buy furniture, and I met Greg,” Joni said. “A year and a half later, we were married.”

The couple ran Eurway in Dallas and expanded it to Austin in 1995 and Houston in 1999.

They sold the business in 2005 and founded Collectic two years later.

In 2010 the new Eurway owners went bankrupt, so the Greesons bought the business back and relaunched it as a web-only
enterprise.

“We’re unique in this industry in that we run two operations,” Greg said. “The brick and mortar is much more hands on—about 80 percent of the business here in Rollingwood is custom order.”

He said almost everything in the store is available in 10 to 1,000 fabrics and that customers can come in and touch, feel and sit on all the frame options.

“People are always coming in to see what’s new,” Joni said. “Everything in the store is replaced about every three months—if it’s not selling it gets marked down. We have huge repeat business; our customers are our friends.”
SHARE THIS STORY