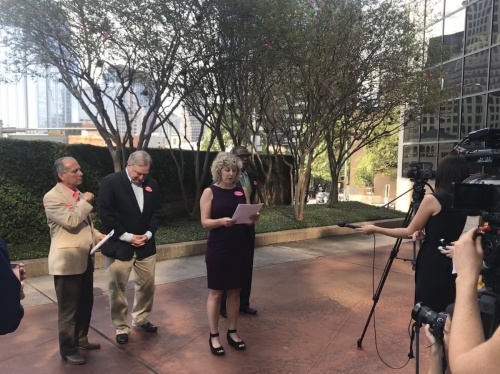 “With over 200,000 Travis County residents in poverty today, Sendero is the single best solution we have for providing healthcare to our most vulnerable community members,” Ortega said.

Central Health, the county’s health district, voted on Sept. 12 to allocate $24 million in its fiscal year 2018-19 budget to wind down operations of Sendero Health Plans. Travis County Commissioners Court was scheduled to vote to approve Central Health’s budget Sept. 18, but postponed the vote after public testimony revealed many members of the plan were caught off guard by the decision and had little opportunity to advocate for its continued funding.

Heather Alden, Executive Director of the SIMS Foundation, a nonprofit organization that helps low-income musicians in Austin access health care, said she was surprised by Central Health’s decision, which would affect 1,000 SIMS clients.

"I heard they had made the decision to dissolve Sendero, which was a shock, last week," Alden said. "We had to scramble just to be here for commissioners court because this is really our stopgap effort to be able to save this health plan."

Many discussions surrounding funding for the health plan over the past several months were held in closed session at the request of Sendero's leaders to keep Sendero competitive within the health insurance market, Central Health Vice President of Communications Ted Burton said.

Central Health hosted Community Conversation events and two public hearings to take public input on the budget. However, while some knew of Sendero’s financial situation, few had any indication that it’s funding was subject to being cut, Alden said.

In addition to the press conference outside of the commissioners court meeting, over a dozen community members spoke inside at the meeting to ask commissioners to postpone their vote on the budget. Central Health CEO Mike Geeslin also spoke and asked for the vote to be postponed. Commissioners agreed to take the issue up at the next meeting Sept. 25.

The original draft budget proposed by Central Health allocated $20 million to Sendero Health Plans. At the Sept. 12 Central Health board of managers meeting when the managers were scheduled to approve the budget, Central Health CFO Jeff Knodel said the $20 million only covered risk-based capital through the end of 2018.

The board approved a motion to add $4 million to assist with the winding down of the program.
Sendero has been losing money for years, according to public financial reports, which was one reason that board member Shannon Jones said he felt skeptical that it could remain financially sustainable.

“We tried this for the last five years and yet find ourselves each year trying to address these issues and saying next year we’ll do better. We’ll recoup those losses,” Jones said at the Sept. 12 meeting. “My question is, if we gave it another year, would it make a difference? That same question has been asked and the answer has always been the same: It didn’t.”

Part of the reason Sendero has been losing money is because its patient population is relatively healthy, according to Central Health. A program known as the Affordable Care Act Risk Adjustment Program requires that ACA plans with the healthiest members must pay funds back to the federal government to be redistributed to health plans with the least healthy members.

Advocates in support of Sendero said there is an alternative plan to start receiving payments from the federal risk adjustment program rather than giving payments away, that has been allowed little public discussion by the board.

The plan proposes adding more of Travis County’s most sick and vulnerable population to the Sendero Health Plans. Central Health runs a program that is operated separately from Sendero Health Plans, called the Medical Access Plan or MAP. MAP is not a insurance plan, but it allows Travis County residents with incomes 100 percent below the federal poverty level or lower to receive limited health care services.

When Board member Valdez made the motion to allocate $6 million in additional funding to Sendero, she referenced the plan to encourage MAP patients to join Sendero Health Plans in an effort to add less healthy members to the patient pool and start receiving funds from the risk adjustment program. She said the plan was discussed during closed session as a financially viable option, however little information about the plan has been available to the public.

“I think that this is going to be a unique opportunity, our one and only opportunity, to be able to leverage our funds to bring on additional dollars from the feds,” Valdez said at the Sept. 12 meeting.

Frank Rodriguez, a former Central Health board member who was in attendance at Tuesday’s press conference, said the public deserved to hear more about the plan to move MAP patients over to Sendero Health Plans and if it could make Sendero financially viable.

“If all these studies [about moving MAP patients] are saying its a viable idea, then tell us what information you have to tell the community that it’s not a viable idea,” Rodriguez said. “Having hunches or saying the ACA is going to go away, that's being complicit with those that want to do away with the ACA.”

In response to the commissioners court decision to postpone its vote on Central Health’s budget, Central Health called a special meeting for Saturday, Sept. 22, to discuss the FY2018-19 budget and funding for Sendero Health Plans.

The meeting will take place at 1 p.m. at the Central Health building at 1111 E. Cesar Chavez Street, Austin.