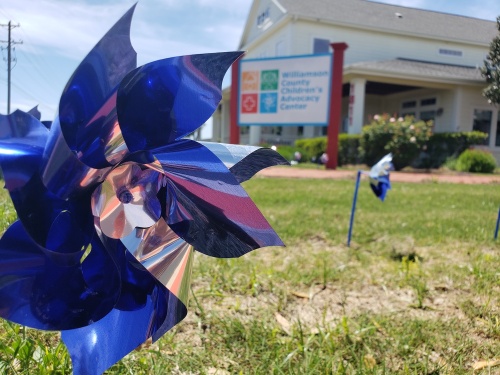 Nurses at the center conducted 245 more exams during fiscal year 2017-18 than they did during the previous year—an increase of 345%, according to the center.

The center opened in 1997 and moved to its current location in 2007 to provide assistance to children who have experienced physical or sexual abuse. As a nonprofit, the center works with law enforcement, child protective service professionals and the county’s district attorney to minimize trauma for survivors of abuse while other agencies conduct criminal investigations.

“The Children’s Advocacy Center is the most important building in Williamson County, period, because it’s dealing with the most precious resource we have: the kids,” County Judge Bill Gravell said. “Those [are] kids that are wounded, beaten, battered and abused, and we’ve got to help them get a handle on themselves.”

Kerrie Stannell, the center’s CEO, said several factors have contributed to the increase in exams the center conducts.

A change in Texas law in 2018 required the center, as well as similar organizations across the state, to facilitate interviews of children who report abuse in Williamson County cases that met a broader range of protocols than were previously required by law. The change alone increased the center’s examinations by 23% in FY 2017-18, Stannell said.

Acute exams are conducted within 96 hours of a reported assault, while nonacute exams can be completed after the 96-hour time frame.

The state reimburses Williamson County for sexual assault nurse exams, while other exams are paid with grant funding, said Crystal Love, a registered nurse at the center.

Stannell said population growth in the county and an increase in awareness on the importance of reporting abuse has also increased the need for exams.

“People need to know not to be afraid to talk about the topic,” Stannell said. “Children in Williamson County deserve that.”

All interviews, exams and counseling sessions are done at the center, said Tiffany Sturman, the center’s director of community engagement.

“The whole reason we exist is to be able to create a holistic environment to meet that child’s needs,” Sturman said.

Sturman said the center does not conduct investigations, but it facilitates exams and cohesiveness between the various agencies involved in child abuse cases.

After a child reports abuse, he or she is brought to the center to meet with law enforcement and protective service officials. The child receives a forensic interview conducted by trained specialists who help the child tell his or her story while minimizing trauma. These interviews are recorded and watched by law enforcement and prosecutors to assist in building criminal cases against alleged perpetrators.

Sturman said prior to the creation of children’s advocacy centers, children interviewed by investigators would often have to repeat their stories to officials from multiple agencies. But with the video recording, children only have to share stories once.

“It re-traumatizes the child every time they have to retell their story,” she said.

While children are interviewed, family advocates at the center direct the child’s nonoffending family members to resources and explain how the process moves forward.

“Nothing is secret in this whole process,” Sturman said. “Everything is very transparent.”

Sturman said siblings and family members of abuse are also eligible for exams, therapy and counseling at the center. All services of the center are free of charge.

“[Abuse] doesn’t just happen to a singular person; it happens to the whole entire family, and we want to make sure any of the children in a household where trauma or abuse has occurred are also safe,” Sturman said.

District Attorney Shawn Dick said his office handles about 200 child abuse cases a year, but rarely do the cases result in a trial. The district attorney’s office hired a full-time prosecutor to handle child abuse cases in October.

Dick said the complexity of those cases, which often involve navigating complicated family dynamics, make prosecution more difficult, particularly if family members do not want to fully cooperate. He said working with the center has developed stronger communication and trust between agencies working to support survivors and bring perpetrators to justice.

“[Child abuse] is universally disgraced,” Dick said. “I don’t know of a person who wouldn’t do what they could for a group of people who can’t stand up for themselves.”
SHARE THIS STORY