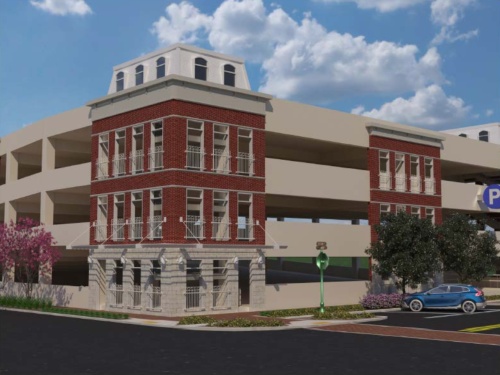 Georgetown officials will develop a four-story parking garage in the city's downtown.

City Council members received their first views Jan. 22 of what a proposed four-story parking garage in downtown Georgetown might look like.

Eric Johnson, the city’s capital improvements project manager, shared preliminary renderings of the structure, which would be built on the southeast corner of Main and Sixth streets and would include about 200 parking spaces along with an elevator and two staircases.

Initial plans for the $5 million garage include exterior space that can be used for public art installations, such as murals or banners, Johnson said.

“Aesthetics are very important to a project like this,” Johnson said. “We, of course, want to make it look like it fits within downtown.”

City officials also plan to expand a public parking lot near the Georgetown Public Library, which together with the garage could add several hundred new parking spaces downtown.

The final design of the garage will receive additional reviews from the council and from Georgetown’s Historic and Architectural Review Commission. The garage could be designed and built by mid-2020, according to the city's timeline.

Council Member Anna Eby had concerns over the size and scale of the garage based on the preliminary renderings.

City Manager David Morgan said the highest point of the structure would be just under 44 feet tall.

“It’s important for this to be visible so this can be utilized well,” Morgan said.

Johnson said the garage’s development was still in its “schematic phase,” and public input would be part of the project.

Council Member Rachael Jonrowe said public participation should be a central component of the garage’s design and development from start to finish.

“I think that’s going to be an important part to this process,” Jonrowe said.
SHARE THIS STORY