In an Oct. 7 statement posted to his Twitter account, Williamson County Sheriff Robert Chody said he had evidence that his recent indictment was not based on evidence tampering. (Ali Linan/Community Impact Newspaper)

In an Oct. 7 statement posted to his Twitter account, Williamson County Sheriff Robert Chody said he has evidence that his recent indictment was not based on evidence tampering.

He said in the discovery process, his legal team found the indictment charges were based entirely on the fact that he signed a contract with “Live PD” and not on the destruction of evidence.

Chody and his team accused District Attorney Shawn Dick of pushing the indictment as a political ploy to remove him from office because Chody is up for re-election Nov. 3.

“This is politics, pure and simple,” attorney David Botsford, who represents Chody, said in the statement.

Chody has also said he has emails between Dick and members of the media, obtained under the Texas Open Records Act, that “show [Dick] emailing reporters with advice on how to do a damaging news story on the sheriff’s office and certain employees.”
RELATED STORIES

• 12 new cases of coronavirus reported in Williamson County on Oct. 8

When Community Impact Newspaper asked Chody’s team several times to produce the emails, none could be provided. Instead, the team handed over one text exchange between Dick and the Austin American-Statesman/KVUE reporter Tony Plohetski that made no mention of the case concerning the death of Javier Ambler.

In a separate Oct. 7 statement, Dick said Chody’s statement does not include all the facts, evidence or circumstances, as most of the evidence has not yet been provided to Chody’s attorney. He added due to this, he is unsure how Chody would have a full understanding of the case against him.

“Obviously, this charge resulted from a several months long investigation with a number of witnesses, documents and records of written and electronic communications,” Dick said in the statement. “After carefully considering all the facts, evidence and circumstance present, a Williamson County grand jury found probable cause to believe that Sheriff Chody and Jason Nassour, an assistant county attorney, individually or as a party have committed the offense of tampering with physical evidence in the death of Javier Ambler.”

Chody is currently battling two separate but overlapping legal cases. The first concerns evidence tampering in the Ambler case with the Williamson County District Attorney's Office to which he was indicted Sept. 25 by a grand jury. The second involves entering a contract with “Live PD” without authority or support from the Williamson County Commissioners Court, which filed suit against him May 19.

The four members of the Commissioners Court—excluding County Judge Bill Gravell, who has recused himself from all things related to “Live PD”—are also suing Big Fish Entertainment LLC, the production company of “Live PD.”

The two overlap as “Live PD” was on the scene and recording the night of the death of Ambler, a Black man whom deputies stunned four times with Tasers even after Ambler said he could not breathe and had heart issues in March 2019. He died in the sheriff's office's custody, and “Live PD” recordings from that night have since been deleted.

“Live PD” was recording when the county no longer had a contract approved by the court, opening the county up to liability issues, county officials said. Only the commissioners have the authority to enter or terminate contracts relating to the county, according to the Texas Association of Counties.

On Sept. 30, Chody petitioned to have his sworn testimony sealed and requested specific protection from any questions surrounding or otherwise related to Ambler’s death in his contract case against the commissioners, citing “current political and politicized context.”

Chody said “Live PD” offers law enforcement transparency and has accused Dick of a lack of transparency in the indictment case by not revealing the full details of the charges against him.

However, Commissioner Russ Boles said if Chody is in favor of transparency as he claims to be, then he should not want the documents sealed in the case with the commissioners. 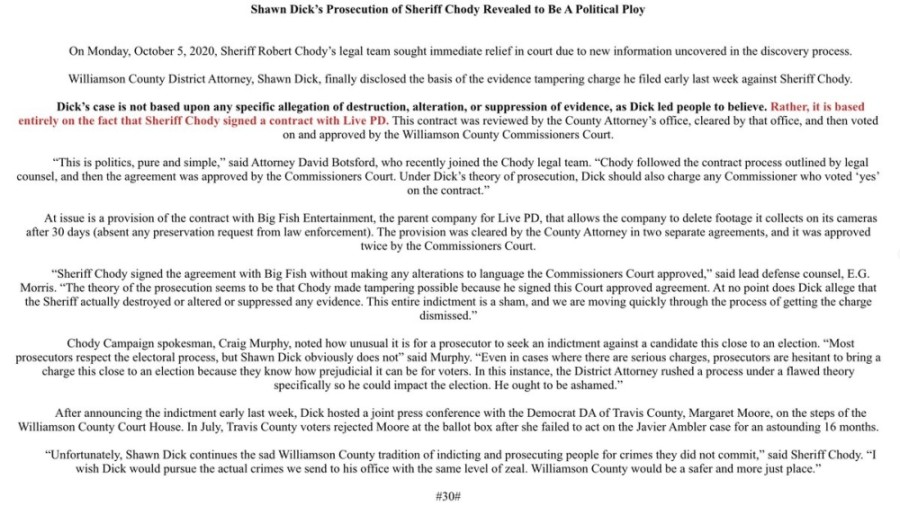