Georgetown ISD is working to provide not only a quality education, but also an equitable one in order to create a more inclusive classroom.

That is why, on July 20, the district launched its equity planning initiative, working to dismantle pre-existing beliefs at the highest level with plans to disperse what is learned through the teacher, student and even community level, officials said. The process will focus on every learner, especially those who are culturally and linguistically diverse, said Cynthia Pike, GISD director of college, career and military readiness.

Pike, who read off the district’s mission of inspiring and empowering every learner to grow and serve, said it is the word “every” that speaks to the reason why equity is so important.

“It’s not about all learners ... some ambiguous qualifier, [but] it’s every individual,” Pike said. “Every single learner deserves the opportunity to be both inspired, empowered and to create the future that they desire.”

Pike said while many may interchange the words equity and equality, they are different. Because while equality means treating each person the same and giving everyone equal access to opportunity, equity is providing proportional resources so that everyone can reach the same goal, as defined by The Education Trust, a national nonprofit that works to close opportunity gaps in education.
RELATED STORIES

“Equity work requires developing and nurturing a true sense of empowerment and belonging for every learner,” Pike said during a Sept. 21 school board meeting.

Pike said this is achieved by examining biases, interrupting inequitable practices, and ensuring equally high expectations and outcomes for every learner.

“Success in equity work is evidenced by reducing or eliminating predictable disparities in learner outcomes based on students’ demographic identities,” she said.

During a Sept. 21 school board workshop, the board discussed what role it plays, to which Superintendent Fred Brent said ensuring equity for all students is a key part of their job.

While Brent is not a member of the board as the trustees provide oversight of Brent’s work as manager of the district, he does work closely with the board.

The equity initiative began in December 2018, when the district reached out for community feedback on what people believe is a future-ready child. In that, the community stated they wanted their children to be culturally aware, to which Pike and her team began to break down what cultural awareness is and how to attain it.

Pike said after months of collaboration, discussion, research and fine-tuning the program, district leaders began the created courses this September and will have monthly meetings on different aspects of equity in education through May. She added that the initiative will be ever-evolving as leaders, teachers, students and the community continue to learn about and develop equity in education.

She also said that it was important for the initiative to start at the district leader level so that they can lead in a more meaningful way.

“The magic happens in the classroom, and the teachers are key players, but we have to empower our teacher leaders to be able to support teachers through that work so that this doesn’t become a false start for them where they’re experimenting in something that they don’t have someone to lead them and support them in,” she said.

Teachers, however, can get involved immediately through teacher virtual sessions available only to educators where information can be unpacked, Pike said.

In August, the district also began disseminating monthly newsletters to the public in English and Spanish in order to create a more informed community on equity, provide resources so that the individual definition on equity can expand and show the district’s growth in the program, Pike said. The newsletters offer a single topical focus with multiple resources, including a featured editorial specific to the subject of focus for that month, she said.

“If we believe that public education is the foundation of our community, then we get to create the community that we want to live in,” Pike said. 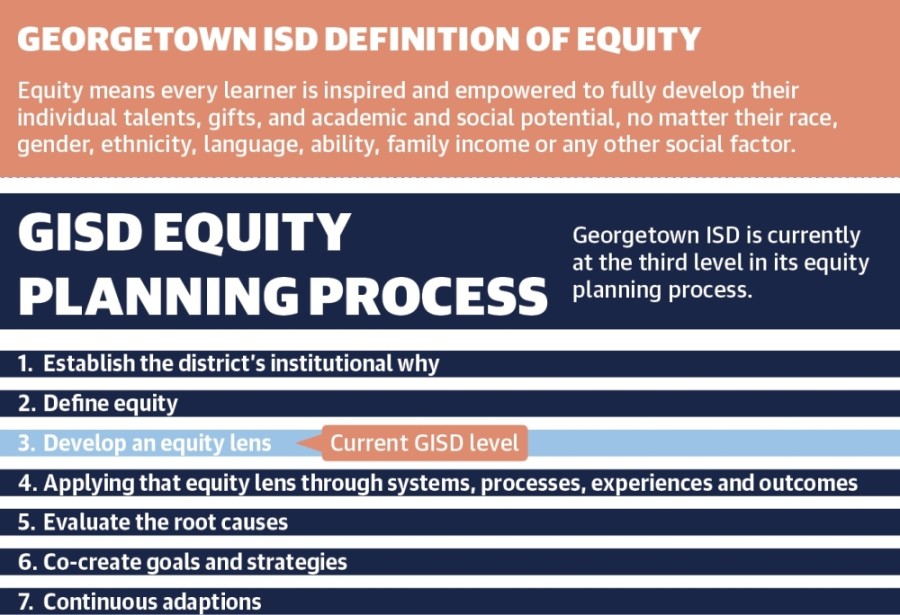