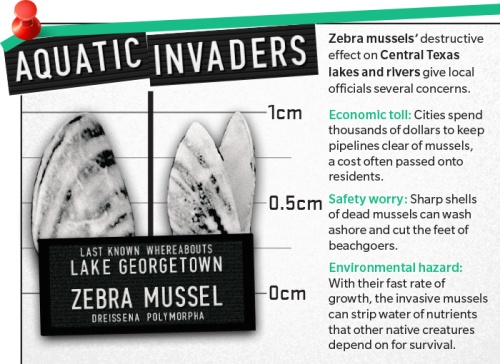 City officials have started to remove colonies of zebra mussels found earlier this year to have attached themselves to a water treatment intake pipe in Lake Georgetown. The effort is among the latest attempts to minimize potential damage from the invasive species that has invaded several Central Texas waterways.

Aside from being a general nuisance, the mussels can clog intake pipes and reduce the amount of water the city is able to collect from the lake and treat for residents’ use, said Glenn Dishong, the city’s utilities director.

“A pipe is designed to allow the flow of a certain amount of water,” Dishong said. “When you have an extra thickness there because of the mussels, you can’t push as much water through.”

Dishong told Georgetown City Council members in March that mussels had been found in and around an intake structure that moves lake water to the Lake Georgetown Surface Water Treatment Plant.

Zebra mussels were first found in Lake Georgetown in 2017, but they did not become a concern for city utility officials until early this year after the infestation of the intake structure was discovered, Dishong said. Following the discovery, officials implemented a plan to rid the mussels from the intake structure and keep them at bay.

Dishong said his department is using a chemical called Earth Tech QC, which has been used in other lakes in the region that faced similar problems, to kill the mussels. He said the chemical can clear dead mussels from pipelines and allow them to move through the city’s water treatment system for removal.

Time is an important element when removing zebra mussels, Dishong said. While live mussels do not hurt water quality, dead mussels that remain in waterways can give treated water a bad taste and smell.

A temporary filter system can run the chemical through the city’s intake structures immediately, but a more permanent one will be in place by summer 2020, Dishong said.

“We have zebra mussels, and it’s an extra maintenance headache and concern for utilities [workers],” Dishong said. “We will continue to do what is required to control them and get them out of there.”

Zebra mussels are destructive shellfish that multiply at a high rate.

Originally from southern Russia and Ukraine, zebra mussels found their way to the Great Lakes in the 1980s and have since made their way south, Dishong said. The mussels, which grow to be about the size of a fingernail, attach themselves to hard surfaces and can grow on top of each other, creating thick layers that often restrict water flow in pipelines and block mechanical structures.

Dishong said the introduction of zebra mussels into Central Texas lakes will impact anyone drawing water from an infested lake for treatment and use. He added that a once a lake is infested there is no way to eradicate them.

Zebra mussels have also been found in Lake Austin, Lake Pflugerville, Lake Travis and Lady Bird Lake in Austin, among other Central Texas bodies of water.

Dishong said that after the removal of the existing infestation at the lake, his department plans to spend $80,000 annually to maintain a supply of the Earth Tech QC chemical in order to keep the city’s intake structures clear of the mussels in the future.

Brandon Mobley, natural resource manager specialist for the Army Corps of Engineers, which operates recreation at Lake Georgetown, said zebra mussels also affect recreational activities at the lake. In fiscal year 2016-17, Lake Georgetown had 452,902 visitors, according to corps data. The lake is used for activities including hiking, biking, swimming, boating, fishing and hunting.

As filter-feeders, zebra mussels have the ability to sustain themselves by straining food particles from water. In this, they tend to make water more clear by  eating large portions of plankton and particles in the water. But this also depletes food resources for other organisms and fish that are needed in the food chain and can decrease the fish count in infested lakes, Mobley said.

“It’s kind of a disruption to the whole aquatic system,” he said.

Mobley added that dead zebra mussels can also be an issue, because their razor-sharp shells wash up on beaches and can cut the feet of visitors.

Texas law requires boat owners to drain, clean and dry their boats after each use to prevent the spread of non-native organisms in the state’s lakes and rivers.

Georgetown resident Glenn Deringer, who has used Lake Georgetown for recreational boating for about 10 years, said the legal requirement backs up a common practice for many boat owners and is part of owning and maintaining a boat.

“I drain my boat and dry it. ... But it’s just part of normal maintenance,” Deringer said.

Marcos DeJesus, a district biologist for the Texas Parks and Wildlife Department, said that even though zebra mussels have already made their way into Central Texas waterways, his department continues public education efforts and emphasizes the “clean, drain and dry” practice for recreational boating in order to minimize harmful effects the mussels can bring.

“It’s sad that we have to deal with it, but it’s a reality now,” DeJesus said. “It’s just part of our lifestyle, so we just need to be educated about it and do the best we can to prevent the spread [of zebra mussels].”