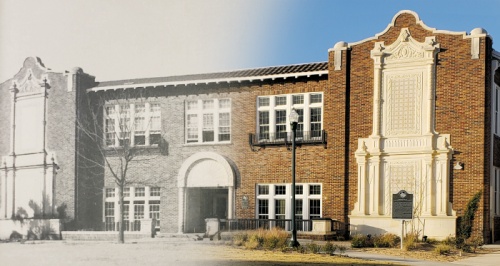 Before it became the new central hub for Georgetown ISD, the historic building at 507 E. University Ave. was the original home of Georgetown High School.

Shirley Farr, who graduated from GHS in 1954 as the valedictorian of her class, remembers it well.

The freshly renovated building, which is named the Georgetown ISD Administration and Hammerlun Center for Leadership and Learning, will open Dec. 17 and house offices for nearly all district employees as well as a new center for professional development. The $14.8 million project was funded through GISD’s 2015 school bond.

“I love that they are repurposing [the former GHS],” Farr said. “It’s hard to see some of the old things that I’ve been so familiar with all these years being replaced. … [But] I love it that the building itself is going to be used for this purpose.”

In developing the new administrative campus, GISD officials said they wanted to serve the current and future needs of district employees while also honoring the historic nature of the former school building.


Renovating for the future

The exterior of the building remains mostly the same, something David Biesheuvel, GISD’s executive director of facilities and construction, said was important to district officials.

Biesheuvel said the district had to receive approval from the city’s Historic and Architectural Review Commission, but minimal exterior changes made for a smooth process.

The only exterior change is the addition of an entrance on the west side of the main building that will allow for direct access into a former auditorium where school board meetings will be held. The remodeled design also highlights the building’s history by keeping exposed tilework—which was a construction technique used in the early 1900s—within the building’s interior walls, Biesheuvel said.

“What is important to Georgetown as a city is to preserve history, and architecture is important,” Biesheuvel said. “We [went] through great lengths to make sure [the history] stays.”

Biesheuvel said most of the main building’s interior has changed and is modeled after the district’s learner profile—an effort to enhance educational opportunities through collaboration and innovation—that sets out to embrace adaptable learning spaces. With moveable walls, cement floors and large barn doors, Biesheuvel said the interior was designed with a modern-industrial aesthetic.

“We want to keep the historical significance in the building but incorporate the modern design necessary to operate an office with technology and openness,” Biesheuvel said. “The needs of schools today are a lot different than when [the structure] was built.”

Melinda Brasher, GISD’s director of communications, said with district employees previously spread between two locations—an administration building at 603 Lakeway Drive and the McCoy Annex at 1313 Williams Drive—having all of the employees on the same campus will allow for greater efficiencies.

While the building will no longer be used for educating students directly, Brasher said the work done inside will enhance the education of all students.

“I think the community will approve when we’re done, to restore and use it even if it’s not being used for what it was originally built for,” Brasher said.

Most of the new offices will be in the main building of the campus with a few offices in the back two buildings.

The Hammerlun Center for Leadership and Learning is located on the first floor of the east back building and provides space for professional learning and development. There are transparent moveable walls that allow for the center to be used as one large space or divided into a maximum of six
smaller rooms.

The center was named after Jerry Hammerlun, former president of the Huckabee architecture firm that has worked on a number of GISD projects. Hammerlun died in June 2017. District officials said he played an integral part in the renovation of the campus.

“[The campus] is going to remain a jewel of Georgetown,” Biesheuvel said. “It’s an anchor of Old Town.” Shirley Farr remembers her time as a student at Georgetown High School, from which she graduated in 1954.[/caption]

GISD Superintendent Fred Brent said it made sense to make the historic building the new district office because of its proximity to downtown Georgetown, placing it at the center of the community the district serves.

The building—built in the early 1920s on land once part of the Southwestern University campus—was also the first property given to Georgetown ISD by the city of Georgetown when GISD was established in 1917.

In 1924 the building became the original location of GHS and served in that capacity until 1974. In that time, a new band room, gymnasium and cafeteria were added to the campus, according to district records.


“It was just good times. It was just a more simple time in my life where things weren’t as complicated.” — Shirley Farr, 1954 Georgetown High School valedictorian, on her time at GHS

The building also served as a temporary home for Wagner Middle School students as they waited for their new school to open in 2017.

“Education [has been] the foundation of this community for more than 100 years,” Brent said. “We want to honor the past but look forward to the future.”


Thinking back, looking ahead

Farr, a self-labeled country girl who grew up on a farm south of Georgetown, will soon attend her 65th high school reunion.

At GHS, Farr participated in student council as secretary, played basketball and acted in a school play. She also met her best friend, Anna Jane Sansom, whom Farr keeps in contact with today.

“It was just good times,” Farr said of her time at GHS. “It was just a more simple time in my life where things weren’t as complicated.”

Farr went on to attend Southwestern University for two years before she left to get married and raise two children. She worked as a teachers’ aide for decades until she decided to go back to school and become a teacher.

Then Farr found herself teaching fifth -graders in the same classroom where she was once a student.

“It’s kind of neat that it turned out that way,” she said. This 1954 yearbook photo shows Shirley Farr, who graduated that year as valedictorian of her Georgetown High School class.[/caption]
SHARE THIS STORY