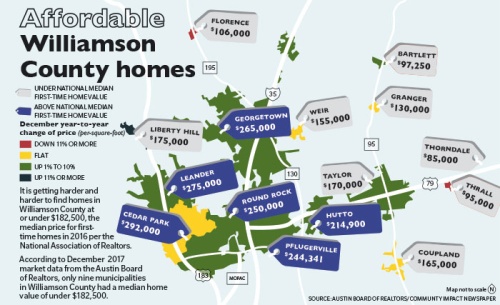 Property value appraisals determined by the Williamson Central Appraisal District’s evaluators will hit mailboxes April 2, and residents can likely expect to see increases in values similar to the past five years.

“All market indicators show that they will go up again,” WCAD Chief Appraiser Alvin Lankford said.

Real estate data from the Austin Board of Realtors shows the median home price in Williamson County settled at $290,000 in December, an 11.2 percent year-over-year climb.

Even as some municipalities and school districts lower or maintain their tax rates,  some Georgetown homeowners continue to see the amount of money levied to taxing entities steadily rise.

And those levies, coupled with an increasingly premium real estate market, are pushing potential first-time homebuyers into the outskirts of the county.

Lankford’s team of appraisers has been out in neighborhoods since September determining this year’s property values through a variety of methods.

The most common method employed for property valuations for appraisal teams across Texas is the comparison approach, in which appraisers determine the market value of a property based on the sales of other homes in the neighborhood.

“We look at multiple sections within one neighborhood or the neighborhoods as a whole, looking for homes that compare to each other,” Lankford said.

The WCAD also drives neighborhoods looking for visible improvements and analyzes aerial photography to identify property improvements, according to Lankford.

Suzanne Gantner, 2017 president of the Williamson County Association of Realtors, reports that several of her clients have balked at their property appraisals a year after buying their first home in the area.

“I have had clients call me after they get their appraisals, and they said, ‘Oh my god,’” Gantner said. “It could be horrible for them.”

Gantner said real estate agents will often help their clients go through the process of protesting appraisals, which can begin immediately after property owners get their appraisals.

State law this year changed the deadline for filing appraisal protests. The new deadline is May 15 or 30 days after the mailing date of a property owner’s appraisal notice, whichever comes later.

According to the WCAD, the appeals process aims to settle appraisal value differences between the property holder and the appraisal district and can include reviews of sales documents, sales prices of similar properties, repair estimates and more.

“You want to bring in your home’s characteristics and sales of other homes like yours. A third avenue of appeal is how you’re being appraised compared to your neighbors,” said Debra Bawcom, vice president of Texas ProTax, an Austin-based commercial and residential property tax firm.

Appraisal appeals have exploded in popularity in Williamson County over the past five years. According to WCAD’s 2017 annual report, protests have more than doubled in that time, going from 20,108 protests in 2013 to at least 51,541 protests in 2017. This year, protests could reach new highs.

It is debatable whether rising property value appraisals have had a negative impact on the real estate market.

Gantner said she personally has seen the number of sales the past quarter dwindle, though home sales traditionally slump around winter every year.

“Sometimes [homeowners] cannot sell a home because the buyer is checking out history of appraisals. It affects buyers, too, because if they see the house has gone up every year they’ll decide they don’t want it,” Gantner said.

According to data from ABoR, Georgetown saw a 10.3 percent year-to-date decrease of sales of single-family homes, condominiums and townhouses in December 2017.

As a whole, Williamson County saw its number of home sale closings increase by 5 percent from 2016-17.

“The pace at which annual [number of homes sold] and prices are increasing in Central Texas is beginning to normalize,” said Steve Crorey, 2018 president of ABoR, in a press release. “Affordability in Austin and the surrounding areas remains a concern for potential buyers.”

Gantner said she has personally noticed a troubling trend of possible first-time homeowners essentially being priced out of southern Williamson County.

“Most first-time homebuyers can’t afford what the average [Williamson County] price is. They need to be in the $190,000s or $180,000s, and that’s few and far between,” Gantner said. “Generally those houses are gone by the end of the day that they come on the market.”

According to the National Association of Realtors’ annual Profile of Home Buyers and Sellers, the median home price for first-time homebuyers in the United States in 2016 was $182,500.

Steadily climbing property value appraisals can end up as the deciding factor for first-time homebuyers, according to Gantner. First-time homeowners sometimes are not immediately provided the financial easement provided by the homestead exemption, which applies a minimum $25,000 appraisal exemption on the property at which an owner claims primary residence.

The homestead exemption places a 10 percent cap on year-to-year  increases in appraised property values. That means if home values rise at more than 10 percent in a given year, the cap can bring a lower tax bill to homeowners who qualify for the exemption.

In a red-hot Williamson County housing market, the lack of that cap could be the deciding factor between buying a first home or continuing to rent.

“It’s getting harder and harder for the first-time homebuyer to buy a home,” Gantner said.