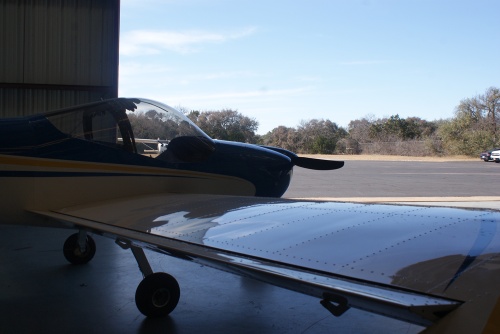 Students enrolled in the aerospace engineering program at Georgetown ISD during the 2016-17 school year built a small plane as part of the curriculum,

Students from East View and Georgetown high schools who enroll in the program, which is one of GISD's career and technical education courses, gain experience offered by few other high schools in the country, according to the district.

The program's enrollment has reached its 24-student capacity in each of the two school years GISD has offered classes. Students who enroll are taking their first steps into a potentially lucrative career field that is in demand.

Aerospace engineering classes meet every other day at East View High School for two class periods. For some classes, students go to the Georgetown Municipal Airport to work on constructing an airplane, which is stored in a hangar at the facility. Students complete the course in two semesters.

“It is our responsibility to prepare students for their future, and part of that process is providing real-world, hands-on experience. Our aerospace engineering program is doing just that,” GISD Superintendent Fred Brent said. “Students are building and flying an airplane, working at our local airport, and benefiting from our mentors and volunteers who have decades of experience in the aviation field.”

GISD engineering teacher Dan Weyant piloted the program’s takeoff. He began exploring the idea about two and a half years ago, he said.

“We had this crazy idea to build an airplane with a class of high school students,” Weyant said.

During the program’s first year, students built their own airplane, and students this year are on track to accomplish the same feat by the end of the 2017-18 school year, Weyant said.

District officials were at first hesitant about starting the program due to concerns over liability, so Weyant founded Tango Flight, a nonprofit that raises the money for the program and owns the plane built by students, alleviating responsibility on the school district.Tango Flight covers the plane’s insurance costs.

Less than two years after launching in Georgetown, Tango Flight started similar aerospace engineering programs in schools in Maize, a suburb of Wichita, Kansas, and Mobile, Alabama, two cities in which districts were able to secure funding and sponsors from local aerospace companies.

“The neat thing about Tango Flight, a really cool unintended consequence, is that it allowed us to expand to other schools,” Weyant said. “Very quickly we started getting approached by other school districts who were interested in what we were doing,”

Local business support helped the program develop, Weyant said. Almost every aviation business based at Georgetown Municipal Airport has helped the program in some way, whether by donating hangar space, contributing financially, providing sponsorships, acting as mentors or giving students rides in airplanes.

“There was a perfect storm for this,” Weyant said. “A lot of people felt this was needed, not just some crazy teacher that wanted to build an airplane with high school
students.”

One of the most important aspects of the program is its volunteer mentors, Weyant said. On any given day multiple mentors with engineering experience are in classrooms or labs. Many of the volunteers are former engineers, pilots or have experience in other jobs related to aviation.

“While they’re helping them build an airplane, they’re also in there talking to them about war stories—literal war stories, with some of them—and all sorts of things,“ Weyant said. “The kids get exposed to [mentors’ experiences], working with people like that, and seeing what’s possible career-wise. I think that’s what makes a difference in their life, 10 years from now.”

Students have a leg up on the competition if they choose to go on and study aerospace engineering at a university, Weyant said.

College students in the U.S. who complete a high school pre-engineering program and major in engineering at a university graduate at a rate of about 78 percent, compared to a graduation rate of 50 percent for students who did not take engineering-related classes in high school, Weyant said.

“It’s a huge difference,” he said.

Even if students in the program do not get a grasp on high-level physics in high school, they are exposed to the ideas that are building blocks to understanding aerospace engineering, Weyant said.

High school pre-engineering programs also serve as a way to “weed out” students who may think they want to go into aerospace engineering, but will end up changing their minds, he said.

Weyant said it is better to have a student take his class and decide in high school that engineering is not for him or her rather than drop out of a college program, or worse, graduate with an engineering degree and hate it.

“Our students who go on to [study] engineering [in college] tend to be very successful because they know what they’re getting into,” he said.

“The first day of class, I fell in love with [engineering],” Krupicka said.

She honed her interest in the aerospace industry while taking engineering classes taught by Weyant at East View. Krupicka said Weyant would invite experts as guest speakers to classes and assign research projects to students about different engineering jobs. Her project focused on aerospace engineering, which she said helped influenced her choice to attend Embry-Riddle.

Weyant’s classes gave Krupicka a head start in her studies, she said.

“Some of the topics we covered in his classes, even if we didn’t go too in-depth with them, I definitely have seen them before [attending] college. So when the time comes for me to dive deeper, I already have background knowledge on the subject,” Krupicka said. “It’s been easier to prepare from those classes.”