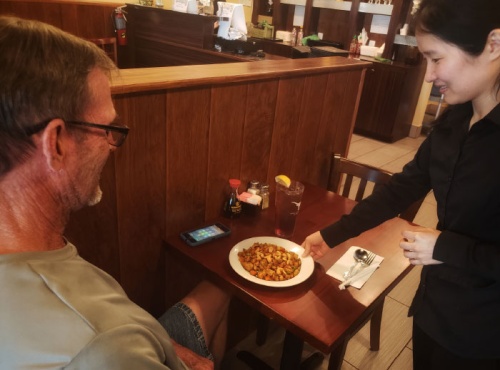 May Zhuang, manager of Linu2019s Asian Cafu00e9, serves a customer.

Wei Lin, co-owner of Lin’s Asian Café, said his favorite part of owning a restaurant is interacting with the patrons.

“I like serving customers,” Wei said. “I love to serve the best of what we have, [and] I like to talk to customers about our food.”

Wei said he enjoys seeing customers smile when they like the food, adding it is “what encourages [him] to keep moving on.”

Wei said he has been working in restaurants since he was in high school, first lending a hand as a server and later as a manager in his parent’s restaurant. He said he loved it so much he decided to open Lin’s Asian Café with his friend and distant relative Jiawei Lin.

The restaurant, named after both owners, opened in Georgetown on March 14 in the Randall’s shopping center. Wei also owns a second Asian cuisine restaurant in Houston.

May Zhuang, Wei’s wife, who manages the Georgetown restaurant, said the owners thought Georgetown was the perfect location to open a second restaurant due to the friendly residents. Jiawei also calls Georgetown home, she said.

Lin’s Café also plans to begin selling beer and wine as early as December when the permit process is completed, Zhuang said.

All of the food is free of MSG, a gluten found in processed foods. Wei said it was an easy decision to have the restaurant be MSG-free after he realized the difference when he changed his own diet.  The restaurant also only cooks with all-white-chicken, he said.

“The food tastes the same without MSG, so why not?” Wei said.

Zhuang, who has been working in restaurants for seven years, said she, too, enjoys interacting with customers.

“I like serving the people,” Zhuang said. “When they have good food, they are really happy, and I feel happy, too.”