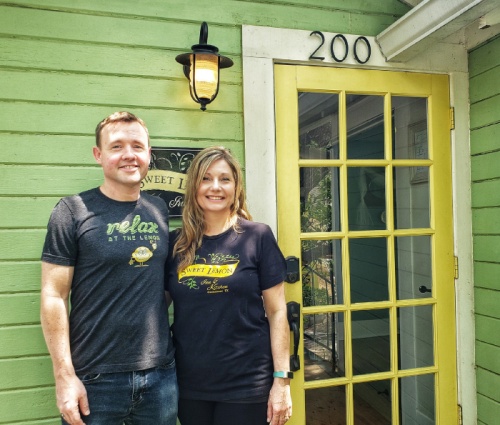 Rachel and Kevin Cummins, owners of Sweet Lemon Kitchen in downtown Georgetown, finished turning the lodging portion of their business in February into event spaces after seeing a more pressing need in the community for places to host events, they said.

“We enjoyed being an inn, but we got a lot of calls from people looking for bridal shower, baby shower and tea party locations,” Rachel said. “It’s something we always wanted to do. … And it just seemed like the time for that transition.”

The farm-to-table cafe offers organic and locally grown cuisine as well as pastries, desserts and gluten-free options. Kevin said the restaurant has a set menu but offers daily specials based on which ingredients are available during particular times of the year. The business also sells local craft beer and wine.

Kevin said meeting new people and making connections with customers is one of the most enjoyable aspects of running Sweet Lemon. He added that he and Rachel have seen a few patrons celebrate weddings, baby showers and the births of children, even though the business has only been open for about five years.

“It’s beautiful to see them doing life with us,” he said.

Sweet Lemon’s remodel included converting the former inn’s three guest rooms into event space and an office. The event space, located on the second floor, can accommodate up 40 people. The space can be divided into two smaller rooms for guests with smaller parties from a group of 12 up to a capacity of 27.

Rachel said she and Kevin wanted to create a business that would be unique to Georgetown but also bring together community members. With the cafe’s health-conscious menu as well as decor and a welcoming environment, they believe they have done just that, she said.

“When [patrons] visit here, I just want them to feel like their day just got better,” Rachel said. “We just want to add a little joy to people’s lives.”