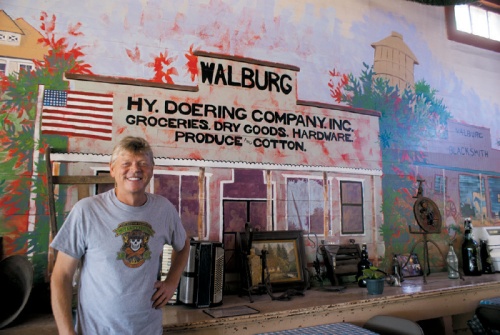 Owner Ronny Tippelt bought the restaurant in 1987 with plans to bringing a little piece of Bavaria to Walburg, Texas.

Ronny Tippelt had every intention of moving back to his home country of Germany to work in real estate after spending some time in the United States. That was until 1987 when he found himself as the new owner of Walburg German Restaurant on FM 972.


At 27, Tippelt bought the restaurant housed in a former mercantile building in Walburg, located just north of Georgetown. The building was previously a grocery store, a hardware store and a local post office before Tippelt and his business partner, Randy Light, transformed it into a little slice of the German state of Bavaria.

Thirty-one years later, Tippelt attributes the success of the restaurant to its authenticity.

Tippelt also has a love for music, which he has incorporated into his restaurant. Tippelt, a yodeler and accordion player, and his band, The Walburg Boys, play at the restaurant frequently. They also invite other local musicians to take the stage.

And when there is not live music on the stage, German folk music fills the room.

In the summer an outdoor biergarten opens, offering outdoor entertainment and dining. From the end of September to the beginning of November, the restaurant has events for Oktoberfest, Tippelt said.

“It’s a celebration station,” Tippelt said of his restaurant. “[We’re] making generations happy and creating a place for them to celebrate.”

When the Walburg restaurant first opened, it only offered traditional German cuisine but has since expanded to include other European dishes—such as cordon bleu—and Texas favorites.

Tippelt said he works with his chef to make sure all menu items, from the bratwurst to the wienerschnitzel, are authentic and consistent.

All the while Tippelt said he is enjoying the rollercoaster experience of owning a restaurant.