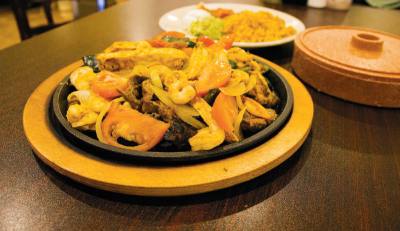 The Caldwell Special fajitas ($15.99) include beef, chicken and shrimp grilled with vegetables and special seasoning.

When brothers Mario and Albert Sorto opened the first MasFajitas restaurant in Caldwell, near College Station, in 1997, they said they had no idea two decades later their company would grow to have five locations spread across Central Texas.

“We were hoping we would make it through the first six months,” Albert said, about the company’s beginning.

MasFajitas’ Georgetown location on Williams Drive opened in March 2016 following the Sortos’ expansion into Taylor in 2005 and Round Rock in 2011. A location also opened in Killeen in March 2017.

The Sortos got their start in the restaurant business while working at their uncle’s restaurant in Houston.

Albert said he and his brother have tried to make the MasFajitas menu more diverse than standard Mexican fare by including seafood, salads and other items in addition to more traditional plates. Fajitas are a menu staple, and each MasFajitas location includes a variety of fajita offerings.

The menus and the general decor and ambience of each location are similar, although there are some variations.

The Georgetown MasFajitas, for example, recently launched weekend breakfast service with a special menu that includes huevos rancheros, breakfast tacos, platters and chilaquiles rojos—fried corn tortilla strips cooked with ranchero sauce and jalapenos, then topped with cheese and served with refried beans and potatoes—among other items.

“We don’t cut corners when it comes to the quality of food,” he said.

As the business has grown over the past 20 years, Mario said MasFajitas has managed to attract a solid customer base in each of its markets.

The brothers said they are not opposed to opening a sixth MasFajitas restaurant if the right opportunity comes along. But for now they are focused on maintaining what they have.

“We don’t want to overextend ourselves,” Mario said.