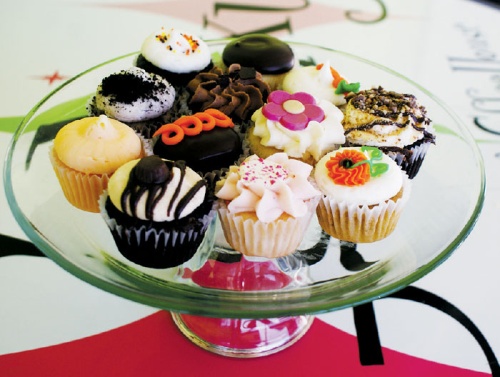 Galaxy Bakery in downtown Georgetown sells miniature cupcakes in packages of 12, all in different flavors, for $16.

Jen and Ike Thorpe took a risk in 2013 when they decided to fulfill a longtime family dream by taking over a bakery just off the Georgetown Square, they said.

Ike always loved baking at home and grew up listening to his dad talk about opening a bakery, an idea that never came to fruition. Years later, after Ike left his corporate job, Jen encouraged him to figure out what he really wanted to do. One year for Christmas, Jen bought him a book about how to bake bread. He enjoyed it so much that he shadowed bakers in the Georgetown area for no pay to learn more about working as a baker, Jen said.

After helping out at what was then known as Galaxy Cupcakes, the owner approached Ike about buying the bakery. He and his wife thought about it for two months, they said. Then, Jen gave Ike some advice that made all the difference by telling Ike that if running a bakery was Ike’s dream, he should do it then and not wait until he’s 50, Jen said.

By New Year’s Day 2013, the Thorpes’ newly renamed Galaxy Bakery was open for business. Nearly five years later, Ike said he is glad he took the risk on the bakery and became its new owner.

“[Having a bakery] was a thing I always thought about doing, and if you don’t take some risks, who knows what you might be missing out on?” he said. “Everything worthwhile in life takes a little bit of risk.”

Revamping the shop’s recipes was one of Jen and Ike’s first orders of business after taking over Galaxy Bakery, they said.

Jen said the use of high-quality ingredients sets Galaxy Bakery’s menu apart, as Jen and Ike insist on using real butter for their baked items instead of shortening, and they make their own vanilla. The difference is one that customers can taste, Ike said.

“There’s definitely a taste factor. Especially people who go to bakeries a lot, they come to us and recognize that we’re something special,” he said. “If we had to use poor-quality ingredients, we’d rather not be in business.”

“We want to give our customers something special when they walk in, like we’re welcoming them into our kitchen,” Ike said.
SHARE THIS STORY