A healthy real estate market in Georgetown would have between 500 and 700 single-family homes for sale at any given time. On March 24, there were 76, said Annette Montgomery, a real estate agent in Georgetown for more than 15 years.

“We started seeing a shortening of the inventory, but it was still manageable through the fall of last year, and then maybe even through December there were still properties,” Montgomery said. “But it seems like after the first of the year, it really went into a critical shortage.”

Georgetown and the Central Texas housing market have seen a record-breaking year in real estate despite the coronavirus pandemic. Most notably is the lack of inventory, which has in turn inflated prices as homes sell faster than they ever have. 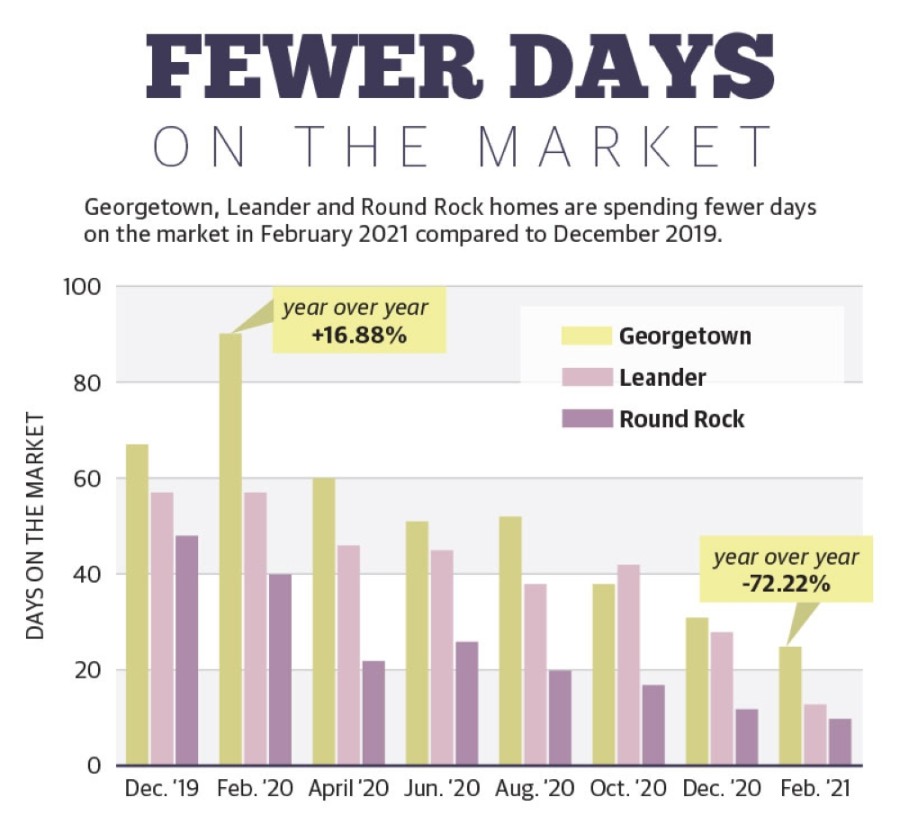 But days on market is also an important indicator because it tells the median number of days homes are listed on the local real estate server over a month and therefore how desirable homes in the area are.
RELATED STORIES

In February 2020, Georgetown homes spent an average of 90 days on the market, according to an Austin Board of Realtors March report. The days on market dropped to 25 in February 2021, down 72.22%.

Montgomery added that another factor impacting inventory is homeowners’ reluctance to move during the pandemic, which is keeping them in their homes longer than they previously would have and resulting in fewer homes on the market.

Hepp said every home she has sold in the Georgetown area over the past six months has been a multiple-offer situation. 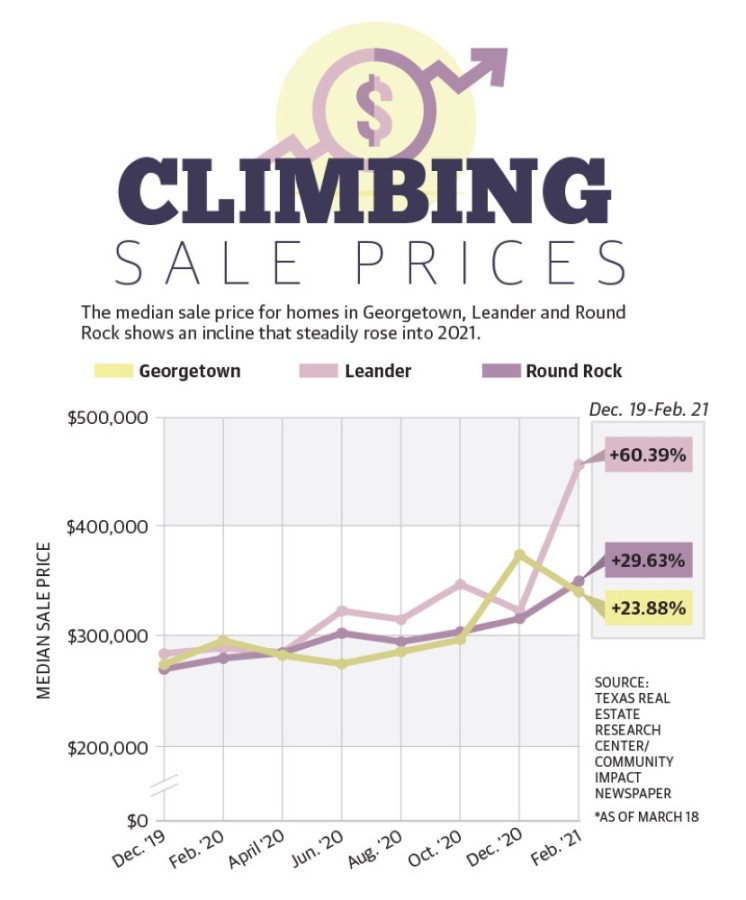 When homes are under multiple offers, it becomes a bidding war where the home is nearly guaranteed to sell above the list price, Hepp said. But with inventory so low, she said homes are frequently selling $100,000-$250,000 above the list price and often in cash, as lenders are not willing to provide more money than the home’s original list price.

And for the homes that are going on the market, they hardly stay for long, Roberson said.

Georgetown resident Keena Avery said he put his Teravista home on the market and three days later had multiple offers, all of which were above the asking price. He said he ended up selling his home for about $90,000 more than what he bought it for in 2016.

Avery, who is building a new home, said he did not expect the house to sell as quickly as it did and that he would have waited for his new home to be more complete before putting his house on the market. Fortunate for him, the new owners will not move in until the summer, he said.

“The process of selling my house was real fast,” Avery said.

Hepp said she now sees homes put on the market for a certain number of days and then the sellers take the highest and best offer from that period.

The entire Austin-Round Rock five-county metro area saw a record-low number of days on market, reporting 31 days in February. This number was down from 62 days in February 2020, ABoR data shows.

“Across the region, a high quantity of offers, cash offers and requests to waive appraisals or option fees are increasingly commonplace,” ABoR President Susan Horton said in a March news release.

While some may have memories of the housing market crash in 2008, Montgomery, Hepp and Roberson said what is happening in Georgetown and in Central Texas is not the same thing.

During the housing market crash, individuals were purchasing homes at very low interest rates and qualifying for and receiving generous home loans they would likely not qualify for otherwise, leading homeowners to purchase bigger homes than they can afford and then were forced to foreclose or short sale.

Interest rates are again low due to the coronavirus pandemic, but homebuyers are fronting additional costs, not lenders, Hepp said. Federal safeguards were also put in place following the crash to prevent another event from occurring, including the establishment of the Federal Housing Finance Agency, among others.

“The biggest difference between now and the [housing market crash] where we were in some type of a housing bubble is that now all the homeowners had equity in their home,” Hepp said. “Before, what happened was people got into houses that they couldn’t afford, using mortgage products that were not consumer-friendly, and they didn’t have equity.” 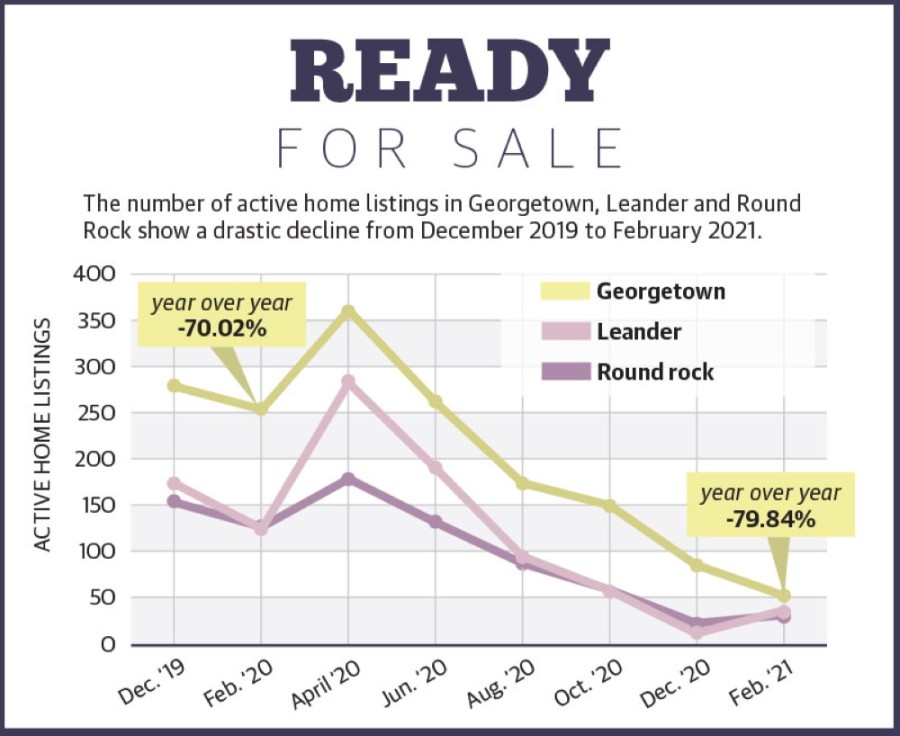 Montgomery attributes much of the growth and therefore competition for homes to new businesses making the Austin metro their new home. Due to this, she said she sees the demand for homes to continue at least into the near future.

“We’ve got Apple coming into Williamson County; we have Tesla coming ... within that metro area,” Montgomery said. “And our unemployment level is quite low, [so companies are] going to have to bring in people to work at these places.”

As of March 29, the Austin-Round Rock area had a preliminary unemployment rate of 5.4% in January, compared to 12.2% in April at the start of the pandemic, according to the U.S. Bureau of Labor Statistics.

With a low unemployment rate, major companies instead have to import employees who need homes and therefore causing a further spike in demand for housing, Montgomery said.

“Honestly, I thought COVID was going to be our cliff, but it was like a rubber band winding this up,” Montgomery said.
Georgetown Georgetown real estate Austin Board of Realtors Real Estate Center at Texas A&M University
SHARE THIS STORY