As of March 1, those operations grew to include a small Williamson County and Cities Health District operation at Our Lady of Guadalupe Church, 111 W. Rio Grande St., Taylor, and a mobile vaccine operation targeting individuals who cannot leave for a vaccine, Gravell said. Throughout March, the WCCHD will also continue to provide doses to indigent individuals through a mobile format, according to county documents.

On March 5, a second mobile operation—dubbed Saved our Seniors Van, or SOSVan—will begin targeting nursing homes and long-term care facilities. This van will hand out 200 doses a day for three days, Gravell said.

Then on March 10, the county will open its third mass vaccination site and sixth overall operation at Dell Diamond in Round Rock. This will be operated by Curative, Gravell said.

“We've got a lot of moving pieces, and they all seem to be working,” he said.

County officials said they will continue to ramp up operations as more doses are allotted and are hopeful that it will be soon, as the U.S. Food and Drug Administration approved a third vaccine made by Johnson & Johnson on Feb. 26.

FHS will also host a 24-hour vaccine drive March 6-7. County officials said the goal of this event is to vaccinate 7,000-8,000 individuals within 24 hours. Officials said FHS has more than 202,000 individuals on its waitlist for the vaccine. County Chief Information Officer Richard Semple said his team is working through the waitlist using data provided by the FHS, Curative, the Texas Department of State Health Services and the federal database to remove any duplicates or individuals who have received their vaccine through other means. The waitlist, which is now managed by the county, was compiled using time stamps of when individuals signed up, officials have said.

County officials said they are also working to ramp up personnel for their call center, which received about 20,000 calls in one week, Gravell said. Current call center operators are county employees who volunteer while also completing work tasks, officials said.

"We're certainly falling short in answering all the calls, ... but the truth is we need more folks," Gravell said.

He added the county is paying election workers to answer phones for additional help, but it may have to look for other alternatives to meet the demand.

Williamson County is not a state-designated vaccine hub; it is only helping to organize the operations.

Below is a breakdown of the county’s vaccine plan as presented March 2. 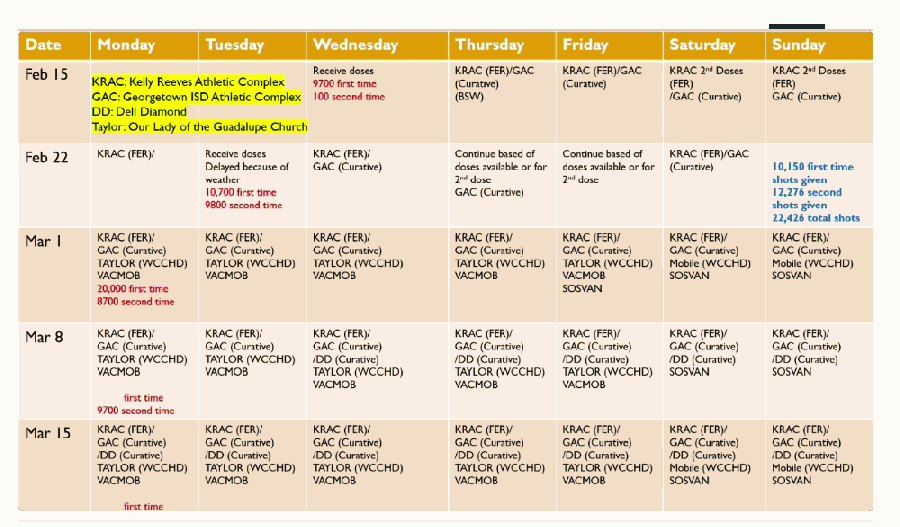