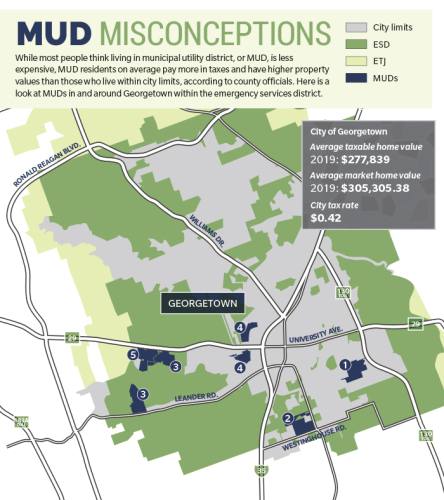 While most people think living in municipal utility district, or MUD, is less expensive, MUD residents on average pay more in taxes and have higher property values than those who live within city limits, according to county officials. Here is a look at MUDs in and around Georgetown within the emergency services district.

This story was updated Oct. 17 to clarify that tax bills are not standard and vary depending on the location of the property and its boundary lines. Some municipal utility district residents may not have to pay emergency service district taxes depending on those lines.

When Kerry Kennedy decided to move into the Wolf Ranch Municipal Utility District from Sun City a year and a half ago, he said he knew it would cost him significantly more in property taxes than if he lived in the city limits but that the pros outweighed the cons.

“We loved the area, so we took the area and the subdivision over the additional taxes,” Kennedy said. “So far, I can’t tell a difference between a MUD and any other district except property taxes are higher.”

Property taxes for municipal utility districts, or MUDs, are typically higher than living within city limits, even if the MUD is surrounded by the city, according to county data.

MUDs are individual taxing entities established by the state at the request of developers, according to the Wolf Ranch website. They are separate from the cities and provide their own services that often come at a much higher cost, according to county tax data.

Georgetown has five MUDs either surrounded by the city—such as Wolf Ranch on Hwy. 29 and Wolf Ranch Parkway—or located just outside city limits and within the Emergency Service District No. 8, which services unincorporated areas around the city, according to county data. They are also separate from extraterritorial jurisdictions, which reside outside of city limits but are under the authority of the city, the Wolf Ranch website said.

Those who live in a MUD typically do not pay city taxes. Instead, residents pay taxes to the MUD, which is used for infrastructure projects such as water, sewer, drainage and road facilities, the Wolf Ranch website said.

Larry Gaddes, Williamson County tax assessor-collector, said he often hears that being exempt from paying city taxes is one of  the reasons many people choose to live in a MUD, believing that if they did not live within the city limits, their taxes would be lower.

Gaddes said that is hardly ever the case in Williamson County.

Instead residents pay MUD taxes at least 54% higher than if they lived within Georgetown city limits. At most, residents could be paying more than double, such as in Williamson County MUD No. 25, also known as the Water Oak development, which has a rate of $0.92 per $100 valuation, and Williamson County MUD No. 15 near Round Rock, which has a rate of $0.87 per $100 valuation, according to county data.

“If you’re living in a [municipal utility district], you are probably paying one of the highest taxes in the county, depending on which MUD you live in,” Gaddes said.

In addition to a higher property tax, some MUD residents may also have to pay an emergency services district, or ESD, tax, Gaddes said. ESDs provide fire, rescue, and other emergency services within their district and spread the cost of those services among property owners, according to the County Judges and Commissioners Association of Texas. The Williamson County Sheriff’s Office provides law enforcement.

The cost of emergency services is folded into the city tax rate for those who live within its limits, Gaddes said.

Other taxing entities such as Williamson County, Williamson County road and bridge, and a school district all appear on all county residents’ tax bills and affect the overall amount of taxes paid, Gaddes added.

“[MUD] homes operate much like a house [in the city limits], and the services aren’t much different. It’s only that they are paying much more for those services,” Gaddes said.

Gaddes said he often hears residents who purchase a home in a MUD are under the impression that their taxes will reduce over time, but he said that is also a misconception.

When developers issue debt to build MUDs, the repayment structure is over long periods of time, meaning homeowners may not see tax rate relief until decades have passed, Gaddes said.

“It takes so long because that debt rate is over 20 to 30 years,” Gaddes said. “That bond says you’re going to pay off this much over the course of 20 years.”

Gaddes said if homeowners are seeking lower taxes, living in a non-MUD unincorporated area far from major cities is the way to go.

While living in a MUD may result in higher taxes, that is not always the case for those living in non-MUD unincorporated areas of Williamson County, said Romeo Manzanilla, president-elect of Austin Board of Realtors.

“The big reason why people move into unincorporated areas or ETJs typically is because of tax savings,” Manzanilla said. “The taxes are typically lower, and depending on the size of home and the assessed value, it can be tens of thousands of dollars of savings.”

Manzanilla said there are benefits to living in an unincorporated area, such as large land plots and less regulations on home renovations. But there are drawbacks, such as potentially living on a septic system or using well water.

Gaddes added that living in an unincorporated area may also mean a longer distance from conveniences such as the grocery store, longer emergency response times and poorer road conditions.

“Typically the services that you are provided are not as good as what you are getting with the city,” Gaddes said.

Tania Easton, who lives in the Wolf Ranch development, said she loves her home’s location and proximity to city conveniences such as the Wolf Ranch Town Center.

Easton added that while the taxes are high, as a former resident of California, she will still see cost savings.

“I fell in love with the beauty with the convenience of all the stores, yet I still get some greenery,” Easton said.

For Mario Burrell, who lives in the new Crescent Bluff development off of Hwy. 29, he said he preferred living in a MUD because of its distance from the inner city life of tall buildings and increased traffic.

“If you live in a MUD, you are going to live outside the concrete jungle,” he said.

But for many residents, one of the biggest benefits of living in a MUD was its sense of community.

Wolf Ranch resident Naomi Mikus said she chose to live in her neighborhood because it was quiet and family-oriented.

Garrett Hall, who lives in Crescent Bluff, said his family’s biggest priority was location as well as getting the country feel while still being close to the amenities of downtown. He added that while Crescent Bluff is a relatively new development with only a few homes moved in, he believed his property’s value would increase as the community is built out.

“You’re buying into a community early for what’s going to be here in the future,” Hall said.

Kelsey Thompson and Brian Perdue contributed to this report.