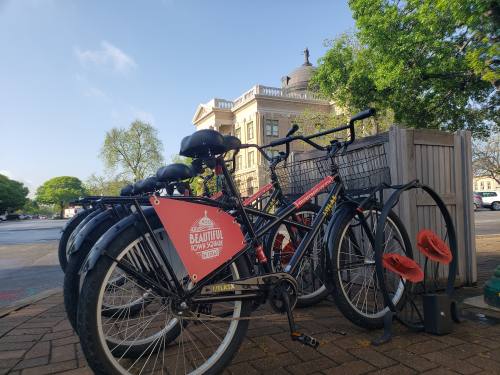 The city of Georgetown is continuing work on its bike master plan.

An initial draft of a Bicycle Master Plan for Georgetown was presented to Georgetown City Council during a workshop session Sept. 24.

The plan presents a blueprint for future transportation projects or educational efforts to support a safe and well-connected bicycle network in Georgetown, according to a news release.

The proposed system includes several types of bicycle facilities, such as bike lanes on streets, buffered bike lanes, off-street paths and pavement markings or signs to indicate dual use of roads for vehicles and bicycles, the release said.

Key portions of the plan include connections across I-35 and University Avenue; three bicycle loops to provide circulation around the city; central east-west and north-south corridors; and bicycle enhancements to the downtown Square area, the release said. The plan also makes other recommendations, such as locations for bicycle racks, roadway adjustments, activities, signs, maps, and educational efforts to help safely integrate bicyclists into the transportation network, it said.

The draft plan includes findings from surveys conducted in 2016, open house meetings and a survey in 2018, an assessment of current bicycle infrastructure and zoning factors, a proposed bicycle system plan and a set of top-10 priority projects, the release said.

The draft Bicycle Master Plan was developed by graduate students at The University of Texas at Austin School of Architecture with assistance and guidance from city staff as well as other agencies, the release said.

A number of city boards and commissions will review and provide feedback on the draft plan, which is scheduled for adoption by ordinance by the City Council in November and December. In addition, there will be a public open house on the draft Bicycle Master Plan at 6 p.m. Oct. 23 at the Georgetown Public Library, 402 W. Eighth St., Georgetown.

The full draft Bicycle Master Plan document, as well as details and updates on board and commission meetings, is posted at transportation.georgetown.org/bike-plan.