Georgetown City Council holds its regular meetings on the second and fourth Tuesday of the month at the City Council Chambers, 510 W. Ninth St., Georgetown.

The city of Georgetown is looking to spend nearly $18.04 million on parks, streets and public safety projects in fiscal year 2019-20.

Paul Diaz, Georgetown budget manager, presented to City Council a list of 21 recommended projects to be considered for the budget during a July 9 workshop.

The most expensive projects would be the Leander Road expansion at $3.2 million, the Southwestern Boulevard project at $2.65 million and purchasing fire department vehicles at $2.2 million.

Diaz also presented a revenue forecast ahead of council passing a budget. Diaz said the city is budgeting an additional $2 million in sales tax growth from FY 2018-19, in which sales tax accounts for a projected 22% of the city’s general fund FY 2018-19. This would be a 6.72% increase from the previous year’s projected numbers, Diaz said.

Diaz added that developments such as Wolf Crossing and a major retail store coming to the community, such as Academy Sports and Outdoors, influence the projected increase.

Diaz said the city also projects a taxable value increase of 4.01% in FY 2019-20 as well as an increase in new value, or new construction, of 48.87%. These numbers are according to non-certified values, he said.

The tax rolls will be certified July 25, Diaz said.

Diaz said he will have an estimate on the effective and rollback rates at the next budget workshop. 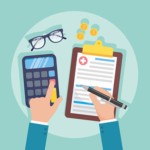