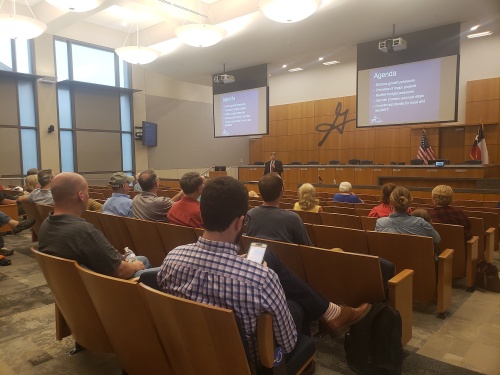 The city of Georgetown held its first budget town hall in more than 15 years July 8.

“People don’t fall in love with Georgetown because their water turns on in the morning; that's not what makes Georgetown unique,” Georgetown City Manager David Morgan said “What’s important for us when we look at a budget is that we prioritize … we look at that those things that are being handled well, but we also need to not lose sight of why people and what people love about Georgetown.”

The city of Georgetown held its first town hall on the budget prior to passing a budget in more than 15 years to garner feedback as it puts together the fiscal year 2019-20 budget.

Many of the residents who attended the event said they would like the city to prioritize quality of life programs, such as giving support for the Georgetown Public Library, which has won state and national recognition, as well as keeping public pools open, such as the Tennis Center Pool, which has been slated for demolition.

Attendees also said they wanted the city to prioritize preparations for future growth.

Georgetown has grown by 56.6% within its city limits between 2010-18, Morgan said. In addition, the number of medical and fire calls have increased by 56%, he said.

“It’s important as we look at our budget to plan for the future," Morgan said. "It's important to invest in the right infrastructure to maintain the high quality of life."

Morgan added after studies and analysis, the city will look to add eight to 12 police officers over the next five year as well as emergency services communications positions.

The city also plans to invest in infrastructure projects in its next budget by continuing road projects, such as the Northwest Boulevard Bridge, the Rivery Boulevard extension and a diverging diamond on I-35 and Williams Drive, among other projects.

“The biggest thing we're doing is Investing infrastructure because the infrastructure we put in place [now] not only responds to what we’re experiencing today but also sets up for future generations as well," Morgan said.