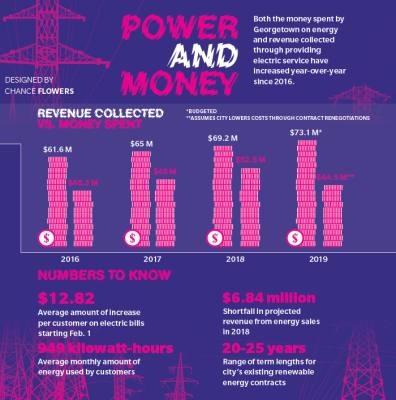 Both the money spent by Georgetown on energy and revenue collected through providing electric service have increased year over year since 2016.

City officials said the city of Georgetown again needed to increase the power cost adjustment, or PCA, on customers’ electric bills following an initial increase in February that was originally expected to be reduced in September, the release said.

The PCA allows the city to compensate for fluctuations in purchased power cost and is one tool to ensure the stability of the electric fund, the release said. The city has adjusted the PCA several times over the years in response to changing energy prices, it said.

The increased costs for energy is in part tied to energy providers not being able to supply energy to the statewide electric grid. This phenomena, known as congestion, occurs when there is more energy generated than is needed to meet demand, the release said. If the energy is not consumed, the transmission lines “fill up,” breaching their limits, which can cause reliability issues. This congestion increases the overall cost of energy for customers, it said.

“As we get through this fiscal year, we will revisit the PCA,” City Manager David Morgan said in the release. “Based on the current performance of the city’s energy contracts and uncertainty regarding the energy costs this summer, fully reducing the PCA may not be possible.”

The city has taken steps to address congestion and to secure new third-party energy management partners that are able to more rapidly respond and react to changing market conditions and better ensure against market volatility, the release said. Along with bringing on new partners, the city is focusing on internal and external resources to increase the reporting, oversight and accountability for decision making related to the energy contracts, it said.

Rating agency Standard and Poor’s adjusted the city’s combined water and electric utility bond rating from AA to AA- on May 27.

The factors cited in Georgetown’s rating include the energy the city is under contract to purchase above what is needed to serve customers, above-average customer electric rates, as well as low energy prices and transmission congestion in the statewide energy grid, the release said.

However, S&P highlights a stable credit outlook for the utility, citing strong debt and cash management, continued customer growth and a strong local economy, the release said. The new rating is expected to increase costs for issuing debt by less than 0.1%, it said.

“Although it’s disappointing, a AA- rating is still in line with or better than most utilities our size,” Morgan said in the release. “In Texas, similarly sized city-owned utilities have bond ratings that range from A- to AA.”

“We are working to address the issues highlighted in the rating as soon as we can,” Morgan added. “This is a multi-year challenge. There is no silver bullet or short-term solution. Our current focus is bringing in new partners to help improve the day-to-day management of our energy portfolio.”


The search for a new general manager begins

The city is also reorganizing the management of its water and electric utilities as part of the budget process currently underway. Earlier this month, longtime General Manager of Utilities Jim Briggs announced he will retire at the end of September. Current Utility Director Glenn Dishong will continue to lead the city’s water utility, and the city will begin the search for a new general manager of electric this summer, the release said.

The new general manager of electric will focus on improving the performance of the city’s energy portfolio, developing new measures to evaluate portfolio performance, as well as clarifying the process for how these measures are shared in meaningful ways with Georgetown City Council and the public, the release said.

This person will also be developing and implementing a comprehensive risk management policy that sets boundaries on risk tolerances and financial obligations and guides decision making at all levels of the electric utility. Finally, they will be charged with studying alternative governance structures for the electric utility—e.g. a separate oversight board—and the implications of opting into the competitive retail market, the release said.

For more information, please review the FAQ on the city’s energy contracts at gus.georgetown.org/electric.
SHARE THIS STORY

Council members agreed that if the charter amendments receive voter approval, they would take effect after Jan. 1, 2022.