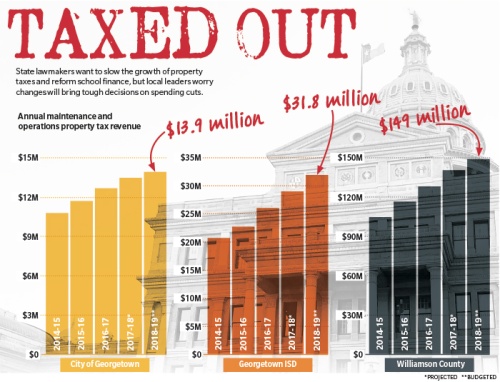 Republican leaders announced a plan in January that would reduce the state’s 8 percent limit on rollback tax revenue growth to 2.5 percent for cities, counties and school districts.

If a city wanted to raise revenue beyond 2.5 percent—to provide cost-of-living pay increases to staff, firefighters or police, for example—residents would cast ballots in an election, and the city would need a majority vote, much like a bond referendum.

The Legislature still has about half of its 140-day session to go, but state and local leaders are preparing as if some form of lower tax limits are a sure thing.

“It won’t pass the way that it is written exactly, but there is a very, very high likelihood that it is going to pass in some shape, in some manner, this year,” said Larry Gaddes, Williamson County’s tax assessor-collector, who attended a nine-hour testimony session in February on the proposed legislation. His office is neutral on the proposal.


What reform would do

Senate Bill 2 and its companion, House Bill 2, would apply the 2.5 percent cap to revenue generated for maintenance and operations, or M&O, in cities, counties and school districts. The cap would not affect debt rates, which are set by bond elections.

Under existing law, when a jurisdiction proposes increasing its M&O tax rate by more than 8 percent above the effective rate, residents can petition for a rollback election, which, if approved by voters, “rolls back” the tax to the 8 percent level. The effective M&O rate is calculated to generate the same amount of revenue as the year prior, not including new property added to the rolls.

Unlike the existing threshold, the proposed 2.5 percent cap would trigger an automatic election rather than an election-by-petition process.

Both Georgetown and Williamson County have cut their tax rates multiple times since 2014, but the jurisdictions have still increased revenue due to growth and rising property values.

Reduced state funding, existing limits on school district tax rates as well as Georgetown ISD’s designation as a property-wealthy district make for a more complex situation compared to the city and county.

GISD’s property-wealthy designation requires the district to send some of its tax revenue to the state, which redistributes the money to bolster poorer school districts under Chapter 41 of the Texas Education Code, also known as recapture, or the “Robin Hood” system.

GISD Chief Financial Officer Pam Sanchez said it is too early to have a clear sense of how the 2.5 percent proposal would affect GISD, but without a boost in state funding the revenue cap would severely limit local educators.

Both legislative chambers have set framework for debate. A proposal in the House adds more than $7 billion to schools, while a Senate plan boosts spending by about $4.3 billion and includes a $5,000 pay raise for full-time teachers.

City and county leaders are on the defensive, saying a 2.5 percent limit would take away a tool for council members and commissioners to manage local priorities and services.

The proposal’s backers say they have a voter mandate.

“The Republican leadership has gotten together and pledged to do two things: address property tax reform and bring some tax relief,” said state Sen. Paul Bettencourt, R-Houston, who leads a Senate committee on property taxes and was the lead author for SB 2.

Increasing property values are a double-edged sword for property owners in Georgetown, one of the fastest-growing cities in the U.S.—they can bring better resale value but also higher taxes.

“Don’t get me wrong: I love my house; I love my neighborhood, and I love Georgetown. But Georgetown used to be the place that was affordable to live, and now it’s just not,” she said.

Georgetown’s total market value increased by more than 48 percent over the past half-decade, growing from about $6.9 billion in 2014 to $10.22 billion in 2018, according to data from the Williamson Central Appraisal District.

Taxes can be a concern for homeowners of nearly all demographics and income levels, from young people seeking their first mortgages to older people just trying to keep up with the rising costs of owning their homes, said Ron Zarriello, a real estate agent with Keller Williams.

“A lot of times property taxes are the difference between getting a loan or not,” Zarriello said. “It prices some people out of the neighborhood they want to be in.”

Georgetown City Manager David Morgan said a 2.5 percent revenue limit would effectively cut more than $700,000 from the city’s budget, which is roughly the amount Georgetown City Council has approved to pay for firefighters and staff in the city’s future Fire Station No. 7.

The revenue cap proposal has a caveat that funding cuts to account for less revenue could not reduce public safety services such as fire and police protection. In Georgetown, those services make up 48 percent of the city’s M&O expenses, Morgan said.

While Morgan agreed that tax reform should be a focus for lawmakers this year, he said limiting revenue without a corresponding plan to maintain services forces local leaders into tough decisions on where to cut spending.

“By doing a one-size-fits-all strategy focused specifically on property taxes without any thought being given to how that might impact service delivery—I just don’t think that’s a reasonable approach,” Morgan said.

Williamson County Judge Bill Gravell said he supports keeping the tax rates in check, but solving the education finance puzzle should take priority at the state level. He said the county estimates a 2.5 percent cap would cost more than $5 million in annual tax revenue, or about $100,000 per week.

Gravell said he is committed to keeping taxes affordable and raising revenue through economic growth and smart development planning. He disputed notions that jurisdictions are careless stewards of tax dollars.

“I’ve heard senators say, ‘Cut the fluff,’ and I agree. But please come to Williamson County and sit in my chair for a day and show me where’s the fluff,” Gravell said. “It’s really disrespectful when I hear somebody down at the statehouse say we need to be better stewards. Come and show me.”

Local leaders also question how much relief a 2.5 percent revenue cap could deliver to taxpayers.

Morgan said if the cap had been in place before Georgetown set its most recent budget, the average taxpayer would have saved about $9 on his or her bill.

Bettencourt rejects the argument that taxpayers’ total savings will be small.

“This will apply to everybody—cities, schools—across the board,” he said. “That’s how you will see the savings. And when you slow the growth of the bills, you’ll see long-term tax relief.”

“We understand that there may be a perception that this is a cap, but actually it’s a vote,” Wilson said. “All it means is that it puts it right back into the voters’ hands.”

Lawmakers and local officials agree a solution on school-finance reform could provide the best answer for long-term tax relief.

“Voters in Williamson County are pretty astute. They know the reason their property taxes are going up is because we have a broken school-finance system,” said state Rep. James Talarico, D-Round Rock. “The greatest driver of property tax growth is your school bill.”

Away from the political debate, everyday taxpayers are often lost when it comes to understanding the dollars and cents of their tax bills, WCAD Chief Deputy Appraiser Chris Connelly said.

The city, county and school district are the big three local jurisdictions, but depending on where Georgetown property owners live they can also be taxed by smaller entities such as municipal utility and emergency services districts.

Taxing jurisdictions must approve rates before Sept. 30 in order for them to take effect for the following fiscal year. Jurisdictions must give taxpayers advance notice of proposed rates and hold public hearings before rates are adopted.

Appraisal districts determine property values, which are based on market conditions. Property owners who disagree with their appraisals can protest before a review board.

Connelly said he thinks many taxpayers put greater concern on their appraisals as opposed to the tax rates themselves, even though each component determines annual payments.

Wanke said she has protested the appraised value of her home every year since she bought it, but 2018 was the first time she was unable to get her appraisal lowered.

Her family is weighing options, including selling their home, even if it means walking away from money they have invested. While Wanke said she values the services that are paid for with property taxes, her unaffordable tax bill has led to some second-guessing.

“If I could turn back the clock and had known the values would have been so high, I might have chosen differently,” Wanke said. “I’m not blaming the city, per se, or the county. I’m not an angry citizen. I’m just frustrated.”