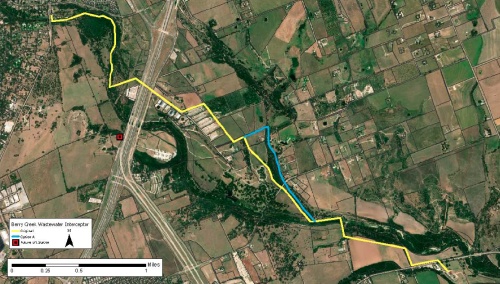 A proposed new route (shown in blue) for Georgetown's Berry Creek wastewater pipeline would bypass Berry Springs Park and Preserve by shifting northeast of the park.

Following the rejection of a proposal for a new wastewater pipeline through Berry Springs Park and Preserve, Georgetown General Manager of Utilities Jim Briggs presented City Council with a new plan Jan. 8 that would sidestep the park but cost more money to build.

Williamson County commissioners voted unanimously Dec. 18 to turn down the city’s plan for a portion of the pipeline, called the Berry Creek Wastewater Interceptor, to run underneath the county-owned park at 1801 CR 152, Georgetown. Opponents of the plan feared the pipeline’s construction and operation could harm the park, which includes protected nature habitats as well as trails, picnic pavilions, campsites and other amenities.

The pipeline would connect the city’s Berry Creek Lift Station on Airport Road west of I-35 to the Pecan Branch Wastewater Treatment Plant on FM 971 east of SH 130.

Briggs said the pipeline’s route could move northeast to bypass the park by running east along Market Street, then turning south along private property adjacent to Dry Berry Creek before continuing toward the treatment plant.

Shifting the route would increase the pipeline’s $25 million construction cost by about 10 percent, Briggs said.

Additional engineering work is needed before the proposal can go to a council vote, Briggs said. The board of directors for Georgetown Utility Systems, an advisory board for the city-owned utility, will also weigh in.

Council Member Steve Fought said he liked the fact that the alternative could be developed by the city alone.

“That’s very attractive to me to get it all under one political body,” Fought said. “That way we got the authority to do what we want, and we’re the ones that are held accountable.”

“We should try to minimize the interaction with our colleagues over at the Commissioners Court on this,” Ross said. “We don’t really need their help.”

Council Member Rachel Jonrowe told Briggs she wanted additional information regarding the likelihood of leaks or spills from the pipeline, which would be designed to utilize gravity to move wastewater to the treatment plant.

Building a gravity-based pipeline that would include a portion underneath the park was considered the most feasible option in terms of safety and financial cost, Briggs said.

The new alternative would allow the pipeline to still use gravity to move wastewater but would require a lift station, which uses electricity to move water, to provide service to any future development near I-35 and SH 130, he said.

City planning for the pipeline began in 2016, although the need for the line was first identified in 1989 by the Texas Water Development Board’s Wastewater Master Plan.

The council voted in December to award a $5.5 million contract with Austin-based Santa Clara Construction to build a separate portion of the pipeline between Berry Creek near Airport Road and Sun City to the west.
SHARE THIS STORY