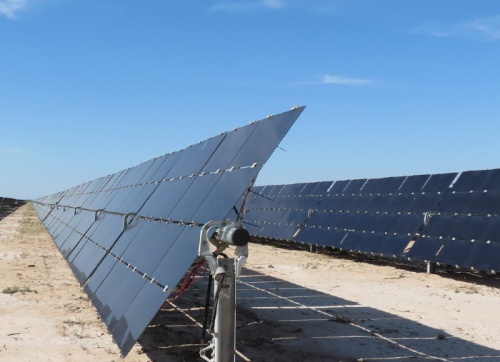 Georgetown officials will try to renegotiate the city’s renewable energy contracts and find other cost cuts after a late-summer drop in energy market prices lost the city’s utility $6.84 million.

The electric fund for Georgetown Utility Systems, or GUS, the city-owned utility that is the sole provider of electricity and water for more than 40,000 residents, is now projected to end at $1.97 million for the city’s 2017-18 fiscal year, which ended Sept. 30. The fund was initially projected to end at $8.81 million, according to a presentation of the city’s latest quarterly financial report by Georgetown Budget Manager Paul Diaz during a City Council policy workshop on Nov. 27.

City Manager David Morgan told council members that the decreased projection is due to the structure of the city’s long-term energy contracts and volatility in the energy market.

Georgetown’s renewable contracts include a 150 megawatt-hour-capacity deal with Clearway Energy's Buckthorn solar plant in West Texas that started in 2018 and expires in 2043. A 144 MWh-capacity contract with EDF Renewable Energy’s Spinning Spur 3 wind farm, which is located near Amarillo, started in 2015 and ends in 2035.

The city has not disclosed the fixed rates that are included in the contracts. Texas open records law considers energy rates trade secrets and exempts their disclosure through public-record requests.

Morgan said the renegotiating process will take some time.

“As you might imagine, there’s significant complexities when you’re looking at renegotiating those types of contracts,” Morgan said during the Nov. 27 workshop. “They’re going to take several months to complete.”

Council members are scheduled to review details during another policy workshop on Dec. 11 on how the loss might be mitigated, including possible hiring freezes and halting new utility-related construction projects.

The council will also vote during its Dec. 11 regular meeting on a budget amendment to account for the electric fund shortfall.

The call for a new strategy is a stark departure from city messaging over the past year that Georgetown’s long-term fixed contracts with solar and wind power producers would be an economic win.

In order to secure lower fixed rates from the wind and solar power producers, Georgetown officials decided to buy more power than the city actually needed in the present to account for future growth and with the intention of selling any excess to buyers on the wholesale energy market.

Georgetown spent $53.6 million on power purchases in 2018, according to the city.

Jim Briggs, the city’s director of utilities, said in an interview that at the time the long-term contracts were negotiated, future market forecasts projected stronger energy prices. But the projection proved wrong.

“We bought into the projection,” Briggs said. “It didn’t materialize, and it went the other direction. For this year we’re forecasting a much more conservative approach.”

Briggs declined to speak specifically about the city’s investment strategy, but he said city staff is pursuing several options to reduce Georgetown’s market exposure and offset the losses.

“Our forte is not to play the market. That’s not our role as a municipally owned utility,” he said.

Briggs said the outcome would have been the same even if Georgetown’s long-term contracts had been made with nonrenewable energy producers due to the fact that the energy market’s price drop affected producers of all types.

“That posed problems for all resources. They all had to struggle with how to make the numbers work during the year. It really wasn’t the resource, whether it was renewable or nonrenewable,” Briggs said.

City Council Member Steve Fought, who serves on the GUS board of directors, said during the Nov. 27 policy workshop that a lack of real-time information on the fluctuation of energy prices puts the city at a significant disadvantage when trying to sell electricity on the open market. Fought said that should the city continue to sell on the market, the GUS board would benefit from adding another member with experience in energy trading.

Morgan said a new management strategy and new technology would be parts of “an aggressive plan to improve the condition” of the electric fund during the city’s fiscal year 2018-19 and into the future.

An FAQ recently posted on the city’s website included information that had not been previously reported by Community Impact Newspaper:

However, if Georgetown does not reduce its exposure in the wholesale energy market and future price decreases occur, GUS customers could see an effect on their utility bills.

“It could have an impact on rates if we don’t take some form of action,” Briggs said.

Unrelated to the projected decrease in the city’s electric fund, the base rate for GUS electricity customers will increase by $4.80 on Jan. 1 in order to cover increased operating costs in the electric department, according to the city.

This story has been updated to reflect a change of ownership at the Buckthorn solar plant in West Texas.
SHARE THIS STORY