Georgetown won $1 million to capture and store solar energy. Here's what happens next 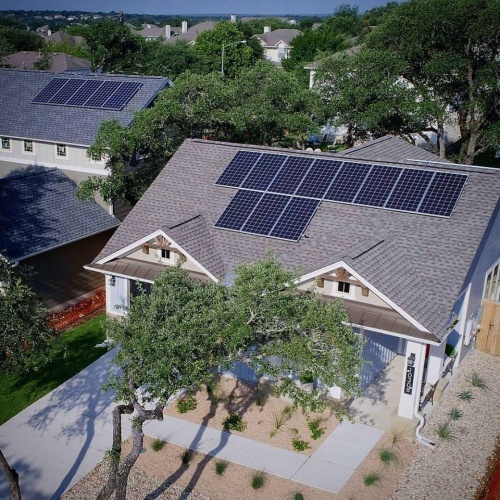 Georgetown will use its $1 million grant award from Bloomberg Philanthropies to place solar panels on the roofs of Georgetown homes.

The city of Georgetown is going one step farther to become energy-independent.

After winning a $1 million grant from Bloomberg Philanthropies U.S. Mayors Challenge on Monday, city officials said they plan to lease rooftop space on homes to install solar panels as well as additional space to install storage batteries that will allow the city to collect and store solar-generated energy. Leases will require final approval from Georgetown City Council.

“(This idea) means Georgetown can be a model to revolutionize how renewable energy is produced at the local level instead of 500 miles away,” Mayor Dale Ross said Wednesday.

The initial project will place nearly 400 solar panels on 10-15 roofs in the city and plant eight to nine batteries that will store energy in case of a power outage, said Chris Foster, Georgetown's manager of resource planning and integration. Foster said in the case of electricity outages, the batteries can automatically turn on and residents won't even notice.

Home-based solar panels and batteries will provide more physical energy reliability during outages as city utility workers can make repairs to power systems without disrupting residents, Foster said. The first panels should be up and running by summer 2019, he said.

Foster added that residents who participate in the program to install the solar panels can save nearly half the cost of paying for installation on their own.

“This project proves that you can develop local solar assets at a cost similar to the wholesale price of energy on (the Texas electric grid),” Foster said.


The U.S. Mayors Challenge is a yearlong competition that had city leaders from across the country develop proposals that would reinvent a city’s practices on health, economics and climate change, among other issues.

Of 300 cities that initially participated, 35—including Georgetown and the city of Austin—received $100,000, technical support and six months to test and learn from their ideas. Nine winners received an additional $1 million each to make the proposals a reality.

Jackson Daly, assistant to the city manager, said City Council will consider final approval of the program in November. A search for a project manager and the purchase of necessary equipment will start immediately, he said.

Daly said the project will flip the traditional way Georgetown procures energy and will reduce the city's dependency on outside sources.

“Instead of investing in renewable energy plants as we’ve done before, (Georgetown producing its own energy) would allow the city to increase and grow in excess power diversity,” he said.