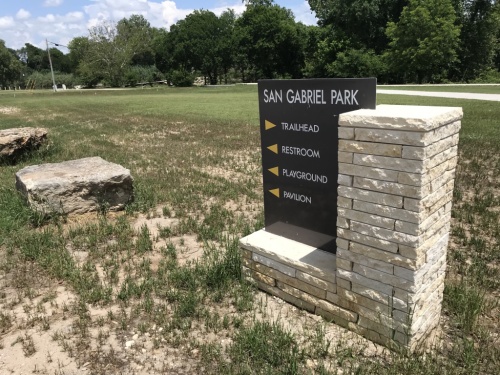 San Gabriel Park is located along the west bank of the San Gabriel River in central Georgetown.

The city will break ground on Phase 2 of improvements to San Gabriel Park at 10:30 a.m. on Sept. 6 at the new playground at Chamber Way and Morrow Street while also celebrating the completion of the first phase of improvements, according to a news release.

During construction, the lower parking lot will be closed, and park guests are encouraged to park in the new lots on the west end of the park.

City Council approved a contract with Ritter-Botkin Prime Construction Co. Inc. of Pflugerville to complete the construction of Phase 2.

Phase 1 of the project included a new playground with sensory walk, improved entry and directional signage, and the restoration of the spring habitat to its natural state through the re-establishment of the spring channel and native vegetation.

Other improvements completed in Phase 1 included parking, roadway, utility and drainage improvements; realignment of the Morrow and Chamber intersection; additional restrooms and pavilions; upgraded park furnishings throughout; and trail and accessibility improvements throughout the park.

Future phases of the San Gabriel Park project include improvements to the remaining areas of the park.

Funding for the improvements was approved by voters in a 2008 bond package.

Access to the park will not be affected; however, short-term road closures and detours are expected to happen throughout construction.

The San Gabriel Park Master Plan, which was completed in June 2015, identified improvements to be completed in phases to limit park disruptions.