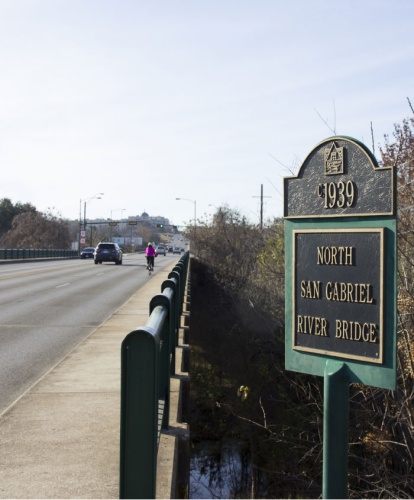 Georgetown and state transportation officials have extended a timeline for planning the Austin Avenue bridges' future.

Georgetown City Council will consider moving forward next week on further review for a project to rehabilitate the Austin Avenue bridges north of downtown and add a new pedestrian bridge just to the east of the original span.

The proposal is the preferred city staff recommendation out of three options favored by the Texas Department of Transportation and the Texas Historical Commission. The location and historic designation of the two cantilevered suspended-span bridges that cross the San Gabriel River bring the additional agencies into the fold.

The work would cost an estimated $7 million-$10 million, according to Ed Polasek, the city’s transportation planning coordinator. Polasek presented the recommendation during a council workshop Aug. 14.

The bulk of the cost would be for the new pedestrian bridge as rehabilitation of the existing structure is estimated at about $3 million.

Council is scheduled to vote Aug. 28 on whether an environmental assessment of the proposal should move forward.

Polasek told council members that the proposed work would require 16-18 months of construction time and would allow the bridges to remain open during the day. It would require closures at night for crews to replace bridge bearings, which requires portions of the bridges’ spans to be temporarily lifted, he said.

Georgetown officials have been considering plans for the bridges’ future since 2016.

The two bridges were completed in 1940 and became eligible in 1999 for listing in the National Register of Historic Places. They serve as a main route into downtown Georgetown.

An inspection in December 2013 found structural problems with the bridges, including cracking asphalt as well as rusting and crumbling concrete. Load-bearing limits on the bridges restrict vehicles weighing more than 48,000 pounds, which includes most fuel and garbage trucks as well as fire department ladder trucks. Forensic testing has shown the bridges are structurally sufficient.

The full Austin Avenue Bridges Project, which the city is completing in cooperation with TxDOT, includes the study of Austin Avenue for possible transportation improvements between Valley and Third streets.