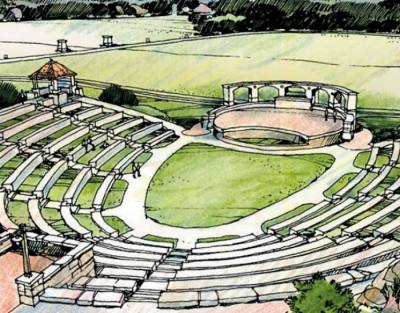 A conceptual rendering shows a proposed amphitheater will be built inside the future Garey Park.

After three years of design work, construction on Garey Park began in March 2017. Jack and Cammy Garey donated their 525-acre ranch and house to the city in 2004 along with a
$5 million cash donation to make Garey Park possible. Georgetown voters also funded the park’s construction with a $10 million parks bond package approved in 2008.

The $13.5 million park, which will be located on FM 2243 about six miles west of I-35, should be complete in time to open by early summer 2018, said Georgetown Parks and Recreation Director Kimberly Garrett. When finished, Garey Park will be about 1 1/2 times larger than Austin’s Zilker Park in terms of size.

Upon completion of construction, the Gareys’ former home will be utilized as an event center, and the land surrounding the house will include an equestrian facility and horse trails, “play ranches” for both children and dogs, hiking trails and open play fields. Georgetown’s parks department is also overseeing improvements to San Gabriel Park and celebrated the completion of improvements to Founders Park in downtown Georgetown in December 2017.