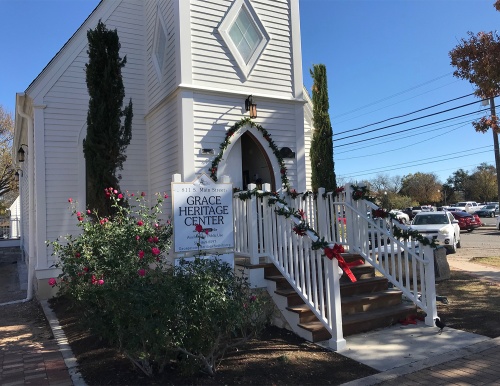 After months-long renovation projects, elected officials and staff from the city of Georgetown and members of Preservation Georgetown will celebrate the reopening of Grace Heritage Center and Founders Park on Wednesday.

Preservation Georgetown, which was founded in 1977 as the Georgetown Heritage Society, works to preserve and promote interest in the city’s heritage, according to the organization’s website.

With the upgrades, the Grace Heritage Center has new exterior siding and trim. Renovation work also included cleaning out the center’s belfry and replacing the central tower roof as well as installing netting on the belfry to keep birds from nesting, according to the city.

The full project cost $418,000, which included additional foundation work, the relocation of a ramp from the building’s side to the building’s rear as well as replacement of the building's front and rear steps.

Grace Heritage Center is the earliest surviving wood-framed church in Georgetown, according to the city. It was built in 1881.

The center has been relocated twice in its history and is situated today about one block north of its original location. Although much of the center’s original building materials have been replaced over the years, its configuration and most of its structure remain as they were when the building was first constructed.

Founders Park marks the site where Williamson County’s first commissioners met in 1848 to select Georgetown as the location for the county’s seat of government.

The cost of renovations for both the center and the park were paid by the city.