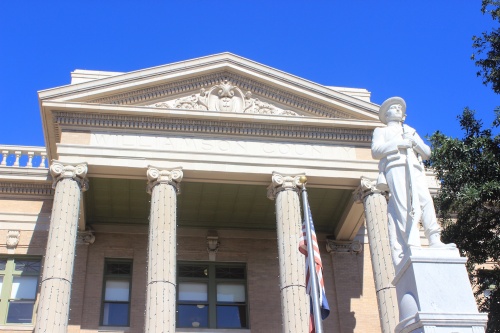 The opening prayer at Tuesday’s Williamson County Commissioners Court meeting touched on the debate brewing in the courtroom about how to best handle a 21-foot monument of a Confederate soldier standing outside the courthouse. As Precinct 4 Commissioner Larry Madsen thanked veterans for serving the country and reflected that no one should take veterans’ service for granted, community members patiently waited for agenda item 33, which would discuss whetherto support an application for an explanatory marker next to the monument.

Ultimately, the court voted 4-1 to not take action on the application for the historical explanatory marker.

Precinct 1 Commissioner Terry Cook first moved that the court support the application for the plaque while letting the statue remain and was eventually the only vote in support of the application.

"I have no confidence that a plaque in it of itself will sufficiently tell the broad background of our environment," Cook said. "I am fine with the statue staying there, but in it of itself and by itself, it really looks around and says, 'Remember these laws were written by whites, for whites, come on in the courthouse.' ... I will not use that side of the courthouse in any pictures that I use of the courthouse. ... I am all for trying to enlarge the picture and trying to educate how blacks felt, how Hispanics might feel today."

Cook also pointed out that should the Texas Historical Commission provide a plaque that the commissioners do not agree is accurate, the court would not have to install it.

County Judge Dan Gattis said he worries a plaque may be more divisive.

"I'm really torn and on both sides, and on my vote on this; I'm asking to not be completely judged, because I don't know the right solution," Gattis said.

Evolution of the debate

Opponents who have previously spoken in opposition of a plaque have said the statue depicting a Confederate soldier and engravings of Confederate States of America flags and logos honors the heritage and history of the Williamson County community and does not need any additions.

Supporters say a plaque would provide important context about the Civil War and its meaning in American history.

The statue first attracted media and public attention in 2015 when the San Gabriel Unitarian Universalist Fellowship in Georgetown circulated a petition asking county commissioners to move the monument to another location in the city, such as the International Order of Odd Fellows Cemetery or the Williamson Museum.

The petition was started in response to the Charleston Church Shooting in South Carolina in which gunman Dylann Roof, a 21-year-old white supremacist, killed nine churchgoers at the Emanuel African Methodist Episcopal Church. The shooting led to movements across the country calling for barring the Confederate flag and monuments from public property.

At Tuesday’s Commissioners Court meeting the topic of debate abutted an important deadline on Wednesday, after which the Texas Historical Commission no longer will accept applications for 2018 historical markers.

Last year commissioners met on the same topic on Nov. 15, the day of the state deadline, and took no action on the application, saying they did not want to make a decision on such a tight timeline.

Proposed potential text for the marker, as included in the application could read:

“Our understanding of history changes over time. Civil War monuments remain important reminders of how history can be influenced by false ideas and misconceptions. This monument was created to recognize the dedication and sacrifice of Americans who fought to establish the Confederate slave-holding republic. Yet this monument must now remind us that their loss actually meant liberty, justice, and freedom for millions of people—a legacy that continues for all of us today.”

The group sponsoring the application, Courageous Conversations GTX, describes itself as an interracial, multicultural and multiethnic group of individuals from various faith communities. The group's application states the prominent location of the monument works against the destruction of "racial discrimination and segregation."

Reverend Lou Snead of SGUUF with Courageous Conversations GTX said the organization is willing to pay for the historic marker.

CJ Jackson, a Georgetown resident and supporter of the plaque, said she grew up in a military family and believes herself to be a patriotic person. She said she learned the value of truth in her military upbringing, which makes the plaque that much more important.

"I was raised by Uncle Sam," Jackson said. "When I think about having a plaque or something that reflects the other perspective, that is telling the truth of the whole story."

Opponents who spoke in the public comment period at the meeting said they were against placing a plaque nearby the statue because it would vandalize the artwork that currently existed.

Another speaker opposing the plaque suggested placing a similar-sized statue honoring leaders of the African-American Civil Rights movement nearby the Confederate monument in front of the courthouse.

Madsen said he supported this idea and would like to explore it further.

Following the decision, Snead said his group will work to engage in conversations with the court and decide how to move forward. He said he wants to examine alternatives to the plaque, but that another statue also presents challenges.

"For us, it is like separate but equal statues," Snead said. "We got rid of white and colored restrooms in this courthouse in the '60s."

During the debate, commissioners Cook and Madsen and Gattis said they would not support the removal of the statue.

Read the group's full application to include an explanatory plaque here.
SHARE THIS STORY