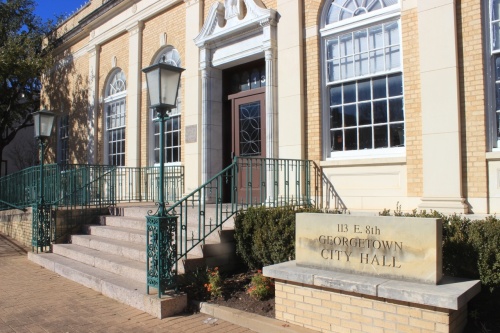 The council unanimously approved a resolution that allows restaurant owners to seek a variance from the Williamson County and Cities Health District to allow dogs on outdoor patios.

The resolution comes after the council opted in July to not approve a similar motion with a 3-4 vote.

“I want Georgetown to be hip where young and old both feel comfortable,” Georgetown resident John Milburn said, adding that the decision to allow dogs on restaurant patios should be made by restaurant owners, not City Council. “Don’t regulate by your own opinions.”

Council Member Steve Fought, who had voted against the resolution in July, said he agreed with residents that “this is a matter for individual businesses to decide.”

“It’s a matter between the business owners, customers and health department,” he said.

City Council approved changes to the Main Streets Program facade and sign grants, which reimburse funds to help businesses in the historic downtown district with the costs of “improving the quality of storefront.”

The changes include increasing the maximum grant amount from $10,000 to $20,000 as well as adding fire sprinklers or suppression systems and removing accessibility barriers to approved projects.

Some council members said they did not agree with expanding the list of acceptable projects to include fire suppression systems or accessibility issues. However, others said including the projects would help enhance and preserve downtown.

Fought, who was opposed to the changes, said he would support them if the Main Street Advisory Board came back to the council in three months “with a systematic approach to awarding the grants to assure some sense of fairness and timing.”

Council Member Keith Brainard also asked the advisory board to consider grants for businesses located off of the Square but in still in the historic district.

The changes were approved in a 5-2 vote with council members Tommy Gonzalez and John Hesser voting against.

A request from Enterprise Products Partners to rezone about 10 acres at 555 Rabbit Hill Road from agriculture district to business park district was delayed with a unanimous vote.

The request had included about two acres of the property proposed to be used for a crude oil pipeline pump station with the remaining property to be used for future commercial development, Georgetown Planning Director Sofia Nelson said.

The company is building a crude oil pipeline that will transport oil from West Texas across the state, a representative from the company said.

Council Members had several questions for the representative, who said he would have to go back to his company for answers.

Brainard asked why the company wanted to put the pump station at that particular location, which is just north of Westinghouse Road on Rabbit Hill Road near the Teravista neighborhood.

“It seems strange to be considering a pipeline pump in the middle of prime real estate in the city,” he said.

The surrounding area has been identified by city officials as prime for retail development.

Council Member Rachael Jonrowe said without answers to the council’s questions she could not support moving forward with approving the first reading of the rezoning request.

The council voted unanimously to delay discussions to the next meeting, which is scheduled for 6 p.m. Dec. 13.

The council also approved its legislative agenda for the 85th Legislative Session, which begins in January.

The agenda outlines policy direction for important issues that affect the city as well as the city's residents, businesses and stakeholders, according to city documents.

Items listed on the agenda are related to taxation, local authority, unfunded or underfunded mandates from state or federal government, parks and utilities.
SHARE THIS STORY