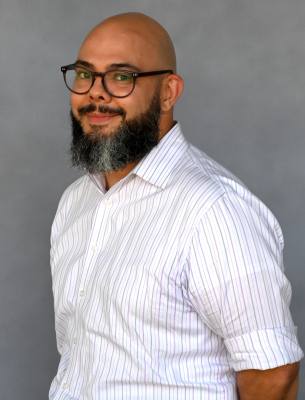 When Jeff and Vinnie McElhaney took over Woops Bakeshop in May 2019, they said they were excited to integrate into the community they had lived in for two years. But after a year as franchisees, the couple decided to strike out on their own, seemingly overnight, albeit in the same location.

“It was a big shot in the dark for us,” said Jeff, who is in his 14th year of service in the Air Force. “We could rebrand and then lose all of our people; we had a loyal fan base.”

The pair, though, did not give that fan base much time to adjust or even find different options.

“We closed on July 9 as Woops and opened on July 10 as Rivery,” Jeff said. “I came in the night prior and painted the walls and brought everything in. We ripped the logos off the walls; it was literally a one-day thing. We didn’t give them a chance to take it in.”

In transitioning from a pastry shop to a full-fledged coffeehouse, the McElhaneys took it slow, with a smaller menu that has grown incrementally as they add new items.

“We really weren’t thinking about a coffee shop at all,” Vinnie said. “We thought about something casual, maybe tropical smoothies, a casual lunch-type place.”

What they landed on was a coffeehouse with an array of dessert-type options as well as sandwiches, salads, beer and wine.

One of the most successful additions has been afternoon tea, a select, coursed experience that requires a 24-hour notice to book.

Afternoon tea—or high tea— starts with a pot of tea followed by a selection of tea sandwiches, then pastries and scones, and, finally, cake and a glass of prosecco or rose.

“It’s something we wanted to try with [Woops], but [corporate] told us it wasn’t their vision,” Jeff said.

“But under our own brand, we can do whatever we want,” added Vinnie, who is pregnant with the couple’s second child. “And afternoon tea fit in our concept. But it’s hard to execute; it’s a different type of service. We focus on the presentation and that bite-sized goodness.”

In addition to wanting to try new things, the McElhaneys also had supply issues in the midst of the pandemic before the transition to Rivery Coffeehouse.

“We started seeing the writing on the wall when we had to supply our own stuff and decided to source locally because that’s where things were,” Jeff said.

That pivot to finding necessary products on their own also paved the way for Rivery’s success.

“Now, we source our coffee from Texas and try to get everything as close to us as possible,” Vinnie said. “It would have been tough for us to scale up from scratch on our own, but our customers stayed with us, and that’s Georgetown. The community feeling here is so amazing.”