contribute today
Ana Montes, owner of La Plaza Meat Market, said she was inspired to open a grocery store that offered Mexican products when she and her friends and family would have to drive to Round Rock or Austin to find items needed to cook Hispanic meals.

“It’s been one of my biggest dreams to own a local business like this,” Montes said. “We didn’t have anything like this in Georgetown. People were going to buy Mexican stuff in Austin in another store like this.”

La Plaza has a slew of offerings, including an extensive meat counter, homemade corn tortillas, a Mexican bakery, fresh produce and homemade meals made fresh each day. Mexican products, such as candies, drinks, sweets and chips, can also be found at the store.

Montes, whose children Marycielo and Ivan Benitez help her run the business, said everything in the store is imported from Mexico or Central American countries to ensure authenticity. She said her favorite thing that they sell is the fresh meats selection because they typically have more offerings than chain grocery stores.

“A lot of places just have fast food everything, and it is really chemically made,” Montes said. “We try to have everything fresh so that people can find that type of food that’s good for you.”
RELATED STORIES

Marycielo said beyond offering groceries, the business looks to share its culture and contribute to the Georgetown economy through local business ownership. She added that prior to La Plaza there was not a business in the city that offered Hispanic foods to this extent. She said she hopes having a Hispanic grocery store closer in distance will encourage people to stop in and learn about what it has to offer.

“We want to show other people our culture ... and offer people different types of food,” Marycielo said. 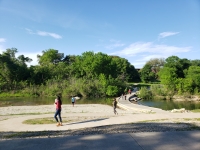 All Georgetown parks and trails will be closed from sunset Thursday, April 9, until sunrise Monday, April 13.

Services include access to school counselors, teletherapy and family therapy.

The parks will close at sunset April 9 until sunrise April 13.