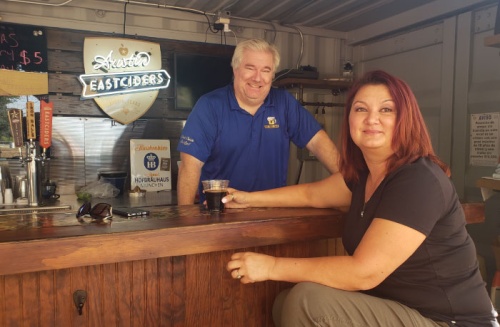 When Mai Lan Bradford found herself with extra land on her hands, she knew she wanted to open a food truck park.

Bradford and her husband, Andy Bradford, own South Fork Fun, Food and Brew, a food truck park located off Hwy. 29 in Georgetown. The park opened March 3.

“I’ve always loved food truck parks,” Bradford said. “They have them all over Austin, and they’re fun, and they’re great. … I thought it would be really great to have one in Georgetown.”

The park has three trucks—Big O’s BBQ, Burgers & More; Ernie’s See Me Rollin Ice Cream; and Taconmaye—with another barbecue truck in the works, Bradford said. She added that Andy and his friend Justin Fluellen own Big Box Bar, a permanent structure that serves beer and wine on the premises.

South Fork also hosts farmers markets every Sunday, and Bradford said she works to get events, such as game nights and live music, to the park as often as she can.

The food truck park is also pet- and kid-friendly with closed-in gates and a jungle gym playset. There is also a shade structure to protect patrons from the sun in the summer months, and will be enclosed for warmth in the winter months, Bradford said.

Bradford, a Cedar Park resident, said she purchased the 3.5-acre property in Georgetown when she was looking to expand her commissary, Korner Kitchen, which is located next to the food truck park. Bradford said she outgrew the space she owned in Cedar Park, and when looking for a place to expand, Georgetown was the best fit.

Bradford, who also works as a caterer, said she has been cooking since she was 6 years old, and has always wanted to own a food truck. She said in the future she plans to have her own food truck in the park selling Vietnamese cuisine.

“[Georgetown residents] like buying food from small-business people,” Bradford said. “I really like that, and I try to encourage that.”