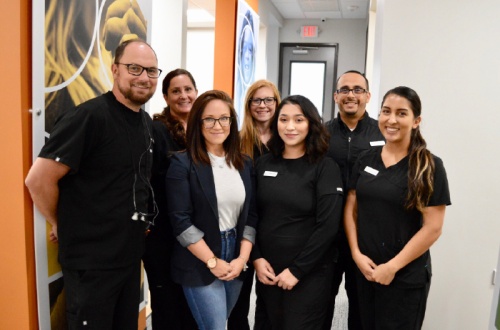 Josh Renken (left) and his Georgetown team opened the Georgetown office in 2018.

While Dr. Josh Renken helps patients build healthy smiles every day,  he also helps people with developmental differences find a job in a world where they otherwise might not.

Renken started his practice in 2003 in Springfield, Illinois, but expanded the office to include Texas locations in 2018 after moving to the state in search of better educational opportunities for his oldest daughter, who has a developmental difference, he said.

He also began a vocational program at Renken Dentistry in which he gives individuals with developmental differences the opportunity to work in administrative or clinical roles. He said this is important because people with disabilities often struggle to find work. The office’s color-shape organizing system helps program participants do tasks when they cannot read.

“The unemployment rate among adults with disabilities is around 85%,” Renken said “It’s a big problem in our society that no one talks about.”

Renken Dentistry also donates to charities that help people with developmental disabilities through its Health On Purpose, or HOP, store. An in-office store sells products, such as toothbrushes and toothpaste, and donates $1 for every item sold to charities.

“A lot of the things that we offer in our HOP store are things that they can take home and improve their health at home,” he said. “Our idea is when they choose to get healthy on their own, we want to help the community get healthy, too.”

The Georgetown location is Renken’s fourth office and the second to open in Texas after the Leander location. Renken said he also plans to expand to South Austin. Three dentists, including Renken, work together across the Texas offices.

Renken said he prioritizes a comfortable environment for his patients, including building positive first impressions, as kids often dread visiting the dentist. In order to ease the stress, he invites students to the Find Your Smile Here School, in which children ages 3-9 spend the day learning about what he does. This program is currently at the Leander office, but Renken said he hopes to bring it to the Georgetown office in the near future.

“I always thought that what we do for people is more than just white teeth,” Renken said. “It’s really more about giving them a way to feel confident in their health and feel good about themselves.”
SHARE THIS STORY