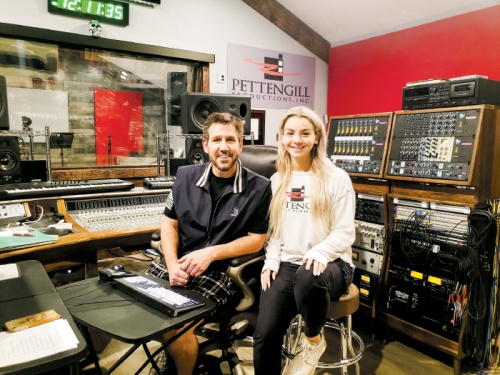 Todd Pettengill and his daughter, Hayley, opened Skull Island Studios in Georgetown in May.

Todd Pettengill started working in the radio business in a small town in Upstate New York when he was 13 years old, getting paid with vinyl records.

“I’ve been mixing music for pretty much my whole life,” Todd said, adding that opening his own business was a natural fit.

Pettengill Productions opened in New York City in 1994 as the parent company to Skull Island Studios. Todd relocated to Georgetown in May to be closer to his oldest daughter, Amanda.

Skull Island Studios—Todd said the name is inspired by his love of skulls and how the shape of a skull looks similar to a microphone—is located in northeast Georgetown near the town of Walburg. Todd said the studio is a one-stop shop for video and music production.

“If you come in and record your album, we can also record your music video. So, it’s hand-in-hand,” he said.

Todd said producing music can be a tedious process, sometimes taking 25-30 hours to produce a song from scratch. But he doesn’t do it alone.

Todd said he gets a lot of help from his youngest daughter, Hayley, who is the vice president of the company.

Todd produces the music while Hayley manages the marketing, social media and scheduling.

“She really is my right hand, and I couldn’t be prouder of her,” Todd said.

Hayley runs the business when Todd is working in New York, where he hosts a daily radio show in the city on WPLG-FM.

The father-daughter duo said they talked about working together for years before giving it a try. Hayley said working with her dad is her favorite part of the job.

Although his company has been around for more than two decades, Todd said relocating to Georgetown has him starting from scratch again, making connections and reaching out to potential clients.

The hardest part of it all: not having enough hours in the day, he said.

“If we could squeeze in five or six more [hours in a day] that would be great,” Todd said.