Woops Bakeshop in Georgetown aims to delight lovers of sweets 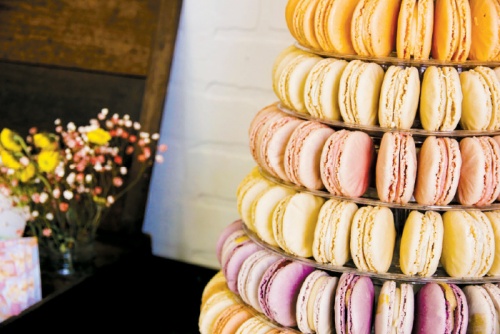 Woops can design gluten-free macaron arrangements for weddings or other events.

Macarons, the bite-sized, sugary French confections, are a focus at Woops Bakeshop in Georgetown but not the only item on the menu, owner Candice Lui said.

With options including coffee, pastries, gelato, cookies and sandwiches, Lui offers customers a mix of international desserts and staples of a classic American coffee shop.

“Even though we’re called a bake shop, we’re more of a cafe,” she said.

Lui opened Woops in the Summit at Rivery Park in September 2017. She runs the shop with her husband, Edwin, a real estate agent in Georgetown. Prior to starting her business, Lui worked as an academic adviser at The University of Texas in Austin. Her transition to bake shop owner started in part when she would go on date nights with her husband after the couple moved to Georgetown in 2010.

As the “sweets person” of the two, Lui said she would be in charge of picking a dessert stop after dinner. Visiting shops around the Austin area helped her develop plans for a business in Georgetown that would focus on sweets but also offer other items. Lui said she chose to work with the New York City-based Woops franchise to take advantage of the company’s training and assistance.

“I love the city, and I love the people here,” she said. “I just wanted to bring something [to Georgetown] that I love.”

Lui said she initially sought to open her shop on the Square but could not find a suitable space. She instead became one of the first business tenants in the Summit at Rivery Park, a Novak Brothers development.

Along with its menu, Woops offers macaron gift boxes and catering for parties and special events.

“We’ve had that partnership from the very beginning. We wanted to bring in something local, a brand that people are already familiar with,” Lui said.

Woops Bakeshop owner Candice Lui said macarons, a specialty of her business, are often confused as cookies, but the sugary treats are technically closer to pastries.

Woops carries at least 18 varieties of gluten-free macarons on any given day. The shop features a macaron of the month, with recent featured flavors including mojito and pina colada, Lui said.

Macarons can be made with a variety of fillings. Woops! uses ganache, a whipped variety. The shop also has several dairy-free jam fillings.

“The creamy consistency comes from that,” Lui said.