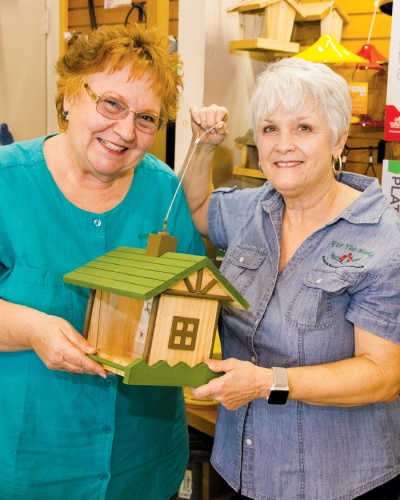 Karen Huffman, left, and Beverly Mosqueda sell premium birdseed and bird-related products at For the Birds on Williams Drive just west of I-35 in Georgetown.

Karen Huffman traces the origin of the Georgetown birdseed and supplies shop she owns with her longtime friend, Beverly Mosqueda, to a rambunctious cardinal she found splashing in a bird bath outside her home.

Huffman said her husband, Scott, suggested opening the business that would eventually become For the Birds after the two watched the brightly colored bird with amusement.

“That’s how the idea was born: just this fancy little cardinal, having a good time [and] making us laugh,” Huffman said.

Huffman and Mosqueda opened their business in April 2016 on Williams Drive just west of I-35. They chose the location due to its proximity to the well-traveled freeway as well as for the small space in front of the building that Mosqueda was able to turn into a native plant garden, which attracts birds and butterflies and also gives Huffman and Mosqueda an outdoor product-testing area.

“We wanted a spot where we could do almost like a natural habitat out there,” Mosqueda said. “If we get something new, we usually test it out there to see how well it’s received by the bird kingdom.”

For the Birds sells premium birdseed as well as bird-related objects and decor for the home and garden. Huffman said she and Mosqueda focus on carrying as many Texas-made items as possible.

Since opening, Huffman and Mosqueda have tried to create a fun atmosphere in the store with a variety of quirks, including the birdseed bar where customers can create their own blends of birdseed or follow one of the shop’s recipes. They also use the shop as an education center for local bird clubs, schools and bird-watching enthusiasts.

Aside from the ecological service birds provide as pollinators and pest controllers, Huffman and Mosqueda said it is just fun to have birds around to watch after a long day.

“It just takes the stress out of the day to just watch them,” Huffman said.