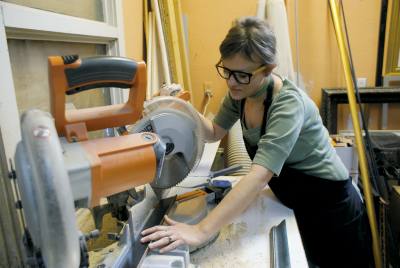 Nearly 12 years ago, The Framer's Gallery owner Kimi Chapman approached the then-owners of the Georgetown-based business in hopes she could recruit them as a client for her graphic design work. Instead, Chapman said the owner liked her so much that he asked her to work for him.

“I started part-time and worked my way up to being basically management, and then [taking over] ownership,” Chapman said. “It snowballed; that’s really how it happened.”

When the former owner decided he wanted to retire in 2013, Chapman decided to buy the business. She celebrated her five-year anniversary as The Framer's Gallery owner in January. Chapman said she loves that she leads a company run by women.

“I love being an owner. I’m young, a woman. And all women work here, and it catches people off guard. It’s kind of fun,” she said.

Chapman said she has always liked the arts and likes the creative aspects of her job as an art framer.

“I get to make pretty stuff prettier,” she said of framing. “A [good frame] does the justice that I think the work needs.”

When Chapman gets a frame order, she takes the framing material the customer has chosen to the back of the studio, measures and cuts it with a saw, then glues the sides together.

Besides selling pieces by local artists, framing is the only service offered at The Framer's Gallery. This allows Chapman and her employees to focus on the quality of the gallery’s framing work.

“I don’t care if it’s a poster or a Picasso,” Chapman said. “I treat every piece of art properly.”
SHARE THIS STORY

Learn tips from a Georgetown Realtor about the real estate market

Learn what to do before you sell your home and what buyers are looking for.

Participants in the academy will gain a deeper understanding about the city's inner workings.

Heidi's Bakery offers homemade baked goods, and orders may be made through social media.