Mesquite Creek Outfitters to open on the Square Outdoor clothing store Mesquite Creek Outfitters is expected to open on the Square at 704. S. Austin Ave. in early October.

Cody Hirt and Brad Strittmatter plan to open Mesquite Creek Outfitters, an outdoor clothing store with a craft beer and wine bar, on the Square in early October.

The store, located at 704 S. Austin Ave., will feature men's and women's high-end outdoor apparel, a fly fishing section in the back portion of the store, and the beer and wine bar with a limited menu in the store's front section, Hirt said.

"We wanted to be [different]," Hirt said. "I feel like the city needs something like this. Combining men's and women's apparel ... I think it will hopefully have a nice draw and uniqueness to it."

"We're trying to focus on the smaller town craft beers," he said.

The business will be designed with a South Texas ranch house look with some taxidermy mounted on the wall and will have seating for 32 indoor and about 16 outdoor seats, Hirt said.

The bar's limited menu could include meat and cheese trays as well as other small plates.

"We want to be the place people come before and after dinner," Hirt said.

Hirt said the business also wants to help local charities and plans to offer customers the opportunity to pick where proceeds from their purchases go.
SHARE THIS STORY 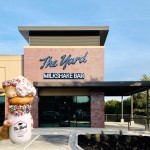