Through traffic and construction, large bat colony continues to roost under I-35 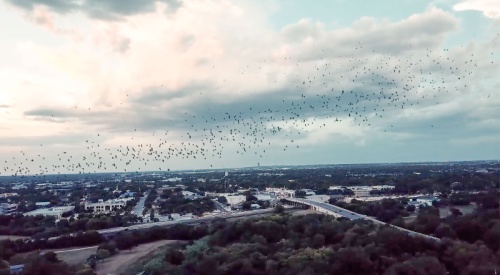 At least 500,000 bats roost under the McNeil bridge on I-35 between March and November.

Between March and November each year drivers on I-35 through Round Rock might notice a strange sight around dusk—a massive swarm of bats flying from under the bridge over McNeil Road.

According to Melanie Gregory, director of the natural resources program at SWCA Environmental Consultants, at least 500,000 Mexican free-tailed bats roost under the McNeil bridge on I-35. The largest urban bat colony in North America is just a bit further south at the Congress Avenue bridge in Austin, which is home to about 1.5 million bats, according to Fran Hutchins, Bat Conservation International’s director of the Bracken Cave Preserve in San Antonio. The Bracken Cave Preserve houses the largest known bat colony in the world with roughly 20 million bats.

While the McNeil bridge may seem like a strange place for such a large colony of bats to reside, Hutchins said it is actually an ideal roost location. The summer sun brings the concrete bridge to a high temperature, optimal for bats, and the bridge’s expansion beams provide a perfectly-sized 0.75-inch space for the bats to roost between the beams.

Hutchins said the McNeil bridge also allows for plenty of space for the bats to drop out from underneath the bridge at sunset to go search for food at night.

“It’s a very large bat roost; that bridge has a lot of space.” Hutchins said. “Other bridges may only have a few thousand bats.”

The bats typically leave around dusk and will fly as far as 60 miles from their roost to find food before returning home just before sunrise, Hutchins said. As they leave the bridge the bats will stay together in a group until they get downrange from the roost—away from waiting predators—before spreading out. The colony can be seen on Doppler weather radar as it leaves the bridge.

Bats navigate using a combination of echolocation, the Earth’s magnetic field, their sense of smell and sight. A common misconception about bats is that they are blind, Hutchins said, but most species have good eyesight.

While construction along I-35 may be a point of frustration for many Central Texas drivers, Hutchins said it is not too problematic for the bats.

“As long as they’re not affected where they are roosting, bats are pretty resilient and have kind of adapted to manmade structures,” Hutchins said. “As long as people aren’t messing with their roosting, they’re pretty flexible.”

Hutchins said bats are the top predator of night-flying insects and eat thousands of pounds of bugs each night. The Mexican free-tailed bat eats mostly crop pests, Hutchins said, which is likely what led them to this particular area.

“They are saving local farmers money and reducing the use of pesticides,” Hutchins said.

The bats come to Central Texas from Mexico in early March, Hutchins said, mainly to have their babies. In November, they will migrate back to Mexico until the next spring.

“They have been doing it for thousands of years,” Hutchins said.