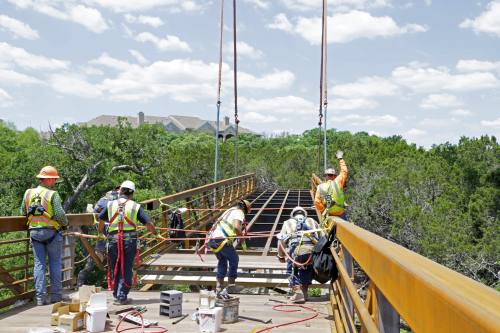 Show map
Changes to the North Walnut Creek Trail design will slow the project, which has been under construction for years. But city officials say a new design incorporates changes requested by nearby residents, including compliance with the Americans with Disabilities Act and protection of endangered salamanders.

The North Walnut Creek Trail is a new trail within the Walnut Creek Greenbelt that will run about 5 miles starting at Balcones District Park and ending at I-35 and Walnut Creek.

The project is broken into phases 1, 1A and 2. Phase 1 is under construction and is scheduled for completion in February. Phase 2 is still being designed.

Phase 1A was originally part of Phase 1, but was established as a subproject to avoid additional federal permitting and oversight, according to the city website.

Phase 1A consists of the design and construction of a new trail from Amherst Drive to the northern end point of Phase 1 at MoPac, where it will connect to the Central Texas Regional Mobility Authority’s shared used path as part of the MoPac Improvement Project under construction.

At an Aug. 20 public meeting at Covenant United Methodist Church on Duval Road, residents expressed dismay about the lack of progress made on the trail. Phase 1A Project Manager Clay Harris said public input from a previous meeting in June slowed progress because part of Trail Segment 4, which runs parallel to Scribe Drive, had to be redesigned.

The original design called for a long, steep portion of the trail near the middle of Segment 4. A new design, which Harris presented at the meeting, incorporates a switchback, or changes in direction with level landings to reduce the slope of the path. Harris said the switchback would reduce speed for bicyclists going downhill and offer relief to bikers and pedestrians going uphill.

The original design was not wheelchair accessible, whereas the new design is compliant with the Americans with Disabilities Act, Harris said.

In the new design, dividing walls between the homes on Scribe Drive and the trail are considerably shorter—a change that was also based on public input, Harris said. The new design also lessens the threat to an endangered species of salamander, he added.

“This, we feel, is a good compromise to address everybody’s concerns,” Harris said of the new design.

About 20 people who attended the meeting agreed the new design was superior although it would set the project back and, Harris added, cost about $300,000 more than the original design.

One resident suggested the city explore a second staging area so two construction companies could work on separate segments of the trail at once and possibly complete the project sooner than Harris’ anticipated date of summer 2018.

“I’m not opposed to doing another staging area, but it’s going to be inconvenient,” Harris said, noting the construction traffic that would plague surrounding residents.

With only one staging area, the city could allow public access on certain portions of the trail while construction is underway on other portions, he said.

Harris said he plans to hold another public meeting in January when the design of Phase 1A is near completion.