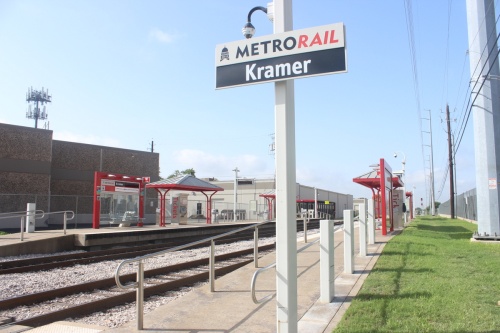 Brandywine Trust Realty is working with Capital Metro to relocate the Kramer Station as part of its master plan for the IBM Broadmoor Campus.

Ahead of the construction of new headquarters for several of the country’s largest tech employers, the city of Austin and Capital Metro are in discussions with private developers to deliver transit solutions to the North Burnet and Gateway corridor.

Capital Metro, in particular, has aggressive plans to reimagine transit options in the corridor in time for the estimated opening day in 2021 for Austin FC at McKalla Place, generally located at the southeastern intersection of Braker Lane and Burnet Road.

“We have major initiatives underway to upgrade the Red Line frequency and capacity,” said Todd Hemingson, executive vice president of planning and development for Capital Metro. “There is a great opportunity to reduce auto use.”

Capital Metro is in discussions with private-sector partners to relocate the MetroRail Kramer Station, according to Hemingson. That station is located more than a half mile away from The Domain and the IBM Broadmoor Campus with limited pedestrian or cycling connectivity. That has led to limited usage of the stop, per Hemingson.

The transit agency is planning to scrap the Kramer station altogether and construct two new rail stations in its place. One station is already permitted by the city in the Broadmoor development, and Hemingson said Capital Metro is working with Precourt Sports Ventures to put a station at the McKalla Place stadium.

Preliminary plans for the stadium show a potential site for a Red Line station at the eastern edge of the stadium site, near Delta Drive.

“We would like to have the McKalla station in place on [Austin FC’s] opening day. That’s probably aggressive, but it is a goal. Broadmoor [station] is the same time frame,” Hemingson said. “There’s still a lot of work to be done.”

Capital Metro is additionally considering rerouting its 803 MetroRapid bus line away from the J.J. Pickle Research Campus. Instead, the line would continue on Burnet Road and run all the way to the Broadmoor campus, allowing for frequent bus service every 15 minutes.

That will be supported by infrastructure improvements to be delivered by the Austin’s Corridor Program Office. Mandy McClendon, media liaison for the Burnet Road corridor, said the city has plans in place for shared-use paths, pedestrian crosswalks, upgraded traffic signals and bus stop improvements.

“The goal is to connect facilities for the entire length of the roadway,” McClendon said.


Delivering transit ahead of traffic

The corridor program office expects to begin construction on the Burnet Road improvements by 2021 and continue through 2024. McClendon stated the entire project, stretching from Koenig Lane to MoPac, is expected to carry a $53 million price tag—paid by 2016 mobility bonds.

These plans follow guidance from the North Burnet/Gateway neighborhood master plan that was adopted by Austin City Council more than a decade ago. That plan designated the corridor as a space “that is more pedestrian and transit friendly and can accommodate a significant number of new residents,” according to city documents.

But the corridor is seeing more accelerated growth than perhaps it has ever seen.

Plans for the Broadmoor redevelopment include at least 2,000 housing units. Construction on the development is already underway.

By 2021, McKalla Place stadium could host up to 20,000 fans at least 17 times a season—the amount of home games scheduled for the current 2019 MLS season.

In the past six months, five new towers at The Domain have been announced, combining for more than 1.8 million square feet of office and residential space, and tech giant Amazon in March announced plans to add 800 employees to its Domain offices.

Although The Domain is not included in the North Burnet/Gateway zoning—The Domain has its own zoning and density codes—local transportation officials are planning for the area holistically.

“Given the tremendous growth in that area and the future of even more, we believe and our partners at the city and even the private-sector folks are beginning to recognize we need more options than driving alone. We cannot sustain it over time,” Hemingson said.