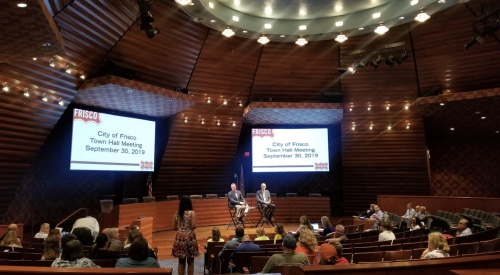 Keating filled in for Mayor Jeff Cheney since he is currently out of the state, Keating said at the meeting.

Several residents in attendance spoke out against the Petland store on Preston Road. The Humane Society of the United States accused the store of animal mistreatment and disease, according to a Humane Society news release.

After “frequent” inspections by the Frisco Police Department, the pet store was in compliance with city ordinance in its last two inspections, interim police Chief Greg Ward said at the meeting.

“We actually met with one of the [general managers] today, and we made it clear to them that we will be frequently checking for compliance,” Ward said the meeting.

A Frisco couple who adopted a German Shepard puppy on Labor Day from Petland said the store is a “deceptive practice.” The couple said they paid more than $4,000 in veterinary care for their puppy that had with an array of illnesses after adoption, including pneumonia and giardia.

Elizabeth Kunzelman, director of public affairs for Petland, said the company is cooperating with Frisco Animal Control and is working with city officials "to be sure we are all working together to promote the highest standards of animal welfare in our community."

"We are grateful for the community’s concern and want to assure everyone that the care and welfare of our pets is our highest priority," she said. "We have consulting, state-licensed veterinarians who establish the protocol in our store and they are checking the pets in our care three times a week."

“I apologize that we move to the speed of government sometimes,” he said. “This council doesn’t always agree on things, but on this item, we are united.”

In addition to the city and police department, the Frisco Chamber of Commerce is now involved to address the concerns at Petland, Keating said.

A few residents requested a timeline update from the city on Grand Park, a 350-acre regional park located off the Dallas North Tollway and Stonebrook Parkway.

Construction for the park is being delayed as the city waits for the cleanup of Stewart Creek. Additionally, the city is planning to include a lake feature, which Keating said is taking up time as well due to pending permit approval from the Army Corps of Engineers and other approvals by the state and the city of Dallas.

A cleanup plan for Stewart Creek was sent to the Texas Commission on Environmental Quality in June, Purefoy said at the meeting. The plan could be approved in the next three or four months, he said.

Along with a lake, Keating said the city is weighing the possibility of an amphitheater at the park.

Since Wade Park, a planned 175-acre mixed-use development along the Dallas North Tollway, halted construction in 2018, a few residents requested an update on the site’s cleanup and the Whole Foods that was planned.

City Development Services Director John Lettelleir said the city currently has not selected a developer and is working to clean up the land.

As far as Whole Foods location goes, Lettelier said the supermarket chain is still interested in the property.