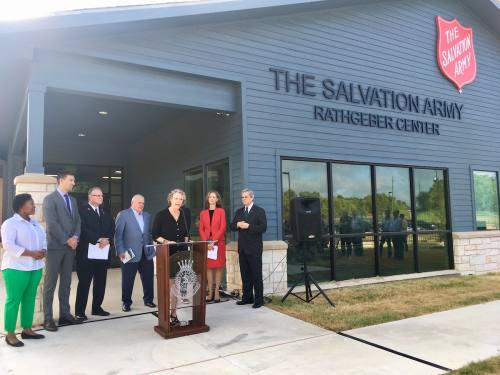 Molly Alexander, executive director of the Downtown Austin Alliance Foundation, announces her foundation's fundraising campaign for the Salvation Army's Rathgeber Center. The new facility is a 212-bed homeless shelter for families with children that has faced delayed openings due to funding gaps.

As Austin’s homelessness issue has continued to attract more attention over the last several months, city leaders have leaned on the message that significant solutions are only possible through a community-wide effort.

On Sept. 9, standing in front of the vacant Rathgeber Center—a new $12 million, 212-bed Salvation Army homeless shelter for families with children at 4613 Tannehill Lane in East Austin that completed construction in June but remains unopened due to a financing gap—city leaders made another plea to the community for help.

“It is in our power to end homelessness in our city,” Austin Mayor Steve Adler said at the podium, flanked by local leaders in government, philanthropy and the nonprofit sector. “This is a challenge that is too big just for the city, and it requires significant [teamwork].”

The event kicked off a fundraising campaign by the Downtown Austin Alliance Foundation, the philanthropic arm of the downtown stakeholder organization, to help meet the shelter’s gap in operational costs. The foundation matched a $100,000 pledge from local philanthropists and shelter namesakes Sarah and Dick Rathgeber and committed to raising another $300,000 for the shelter. The $500,000 effort aims to add to the $1 million in one-time taxpayer funding that the city of Austin plans to include in its fiscal year 2019-20 budget for the shelter’s operational costs.

The $1 million from the city will allow the Salvation Army to open roughly 80 of the 120 emergency beds at the shelter and relocate the 55 families with children residing in the Salvation Army’s downtown shelter to the East Austin facility. Officials have said the new facility is safer and more suitable for children.

“It’s hard for people to see how family homelessness fits into the whole picture because you don’t see them outside,” said Kathy Ridings, area commander and social services director with the Salvation Army. “They’re so precariously situated all over the place. This should be a really good solution for families needing shelter.”

To operate the shelter at full capacity costs $4.9 million annually, Salvation Army spokesperson Corey Leith said. Leith said that after accounting for the $1 million one-time grant from the city, the shelter remains $3.9 million short of opening at full capacity; however, the city’s grant will allow them to open at partial capacity by the close of fall 2019.

Leith said the money raised by the Downtown Austin Alliance Foundation will help the Salvation Army to start opening up capacity for the families on its shelter waitlist, which he said extends to 250 people—81 parents and 169 children.

“We cannot do this alone,” Molly Alexander, executive director of the Downtown Austin Alliance Foundation, which is the philanthropic arm of the downtown stakeholder organization. “We need your help whether you can give $5 or $50,000. Homelessness affects all of us, and it will take all of us to fix it.”

Operational costs are ongoing, however, and go beyond one-time donations. Aside from continuing aggressive fundraising campaigns, Major Lewis Reckline, Salvation Army’s area commander, said he would rely on “prayer” to ensure donations continue to come in and fulfill the shelter’s annual costs.