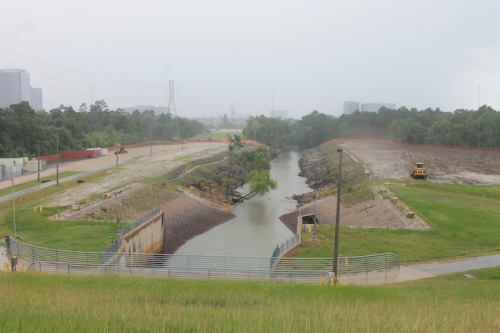 The Addicks Reservoir spillway was closed June 3, but U.S. Army Corps of Engineers officials were monitoring it and Barker Reservoir on a round-the-clock basis.

Hurricane Harvey caused massive amounts of flood damage for thousands of homes and businesses surrounding the Addicks and Barker reservoirs, according to the Harris County Flood Control District.

Nearing the two-year anniversary since Harvey hit the Greater Houston area, affected property owners living upstream of Houston’s reservoirs are suing the federal government for flooding their homes on purpose.

Irvine & Conner, an Austin-based law firm, hosted a town hall-style meeting July 21 at the Four Points by Sheraton at the Houston Energy Corridor for all upstream flood victims to learn about why their properties flooded and what a lawsuit can do for them.

"The two-week trial on the 13 test properties took place in May," said Mary Conner, who practices environmental litigation and regulatory compliance at Irvine & Conner. “From our perspective, it went well.”

Irvine & Conner lawyers are handling claims for clients living upstream of the dams who say the Corps purposefully flooded the reservoir areas during and after the storm.

“It was not possible for the Army Corps to avoid flooding upstream homes,” Conner said. “The Addicks and Barker dams were designed to hold back stormwater runoff from the watersheds … that creates the reservoir flood pools during heavy rain events.”

In heavy enough storms, nearby residential neighborhoods such as Cinco Ranch, Canyon Gate, Lakes on Eldridge and Twin Lakes were also designed to store the stormwater runoff, she said.

She added the government did not purchase enough land to contain the full extent of the reservoir flood pools, and since floodwaters exceeded the boundaries of the property owned by the federal government, property owners within these areas did not consent to the Corps using their property for storing stormwater.

Conner said lead counsel for the upstream plaintiffs filed a brief on closing arguments in June, and the government is due to file its brief in August.

Irvine & Conner will have a hearing before the judge in September in Washington, D.C., to present the oral argument on the briefs.