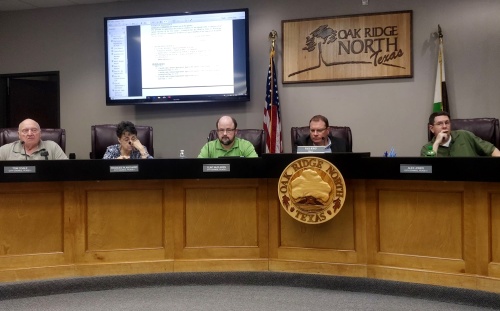 Both All Nations Community School and Journey School for the Uniquely Gifted and Talented were granted permits to move into space in Sojourn Baptist Church, located at 27420 Robinson Road, Oak Ridge North. Both schools will occupy space formerly used by the church’s Sojourn Academy for a two-year term beginning this summer.

The council’s approval came following several public comments in support of the school and deliberation over the permit requests. While no council members opposed bringing the schools to the city in concept, several raised questions related to the schools' effects on local traffic and the necessary change to the city’s plans for the Plaza District, which encompasses several properties west of Hanna Road on Robinson and was designed to augment sales tax collection.

"I have no objections with either of these schools being in Oak Ridge North, and in fact I think they’d be a blessing for our city," Council Member Alex Jones said. "My concern continues to be location—it has nothing to do with the fact that they’re schools, it has everything to do with why this area is zoned as a Plaza District in the first place."

Following deliberation over the merits of granting the permits and establishing conditions for operation of the new schools, both SUPs were approved by 4-1 votes despite some of the council’s initial reservations.

“I see absolutely no reason at this point not to grant both of these SUPs,” Mayor Paul Bond said before the final discussion and votes.

The schools will be required to reapply for new SUPs at least 120 days before the permits expire in 2021 to leave time for city planning or for the schools to vacate Sojourn if they are denied new permits. Other conditions include a requirement that the schools update their facilities for Americans with Disabilities Act compliance and a ban on construction or expansion to the church’s existing facilities.

Following the permitting discussion, the council also approved a proposal for the refunding of the city’s Series 2009 Certificates of Obligation, or CO, at a 1.65% lower interest rate, which could save nearly $300,000 without prolonging the city’s debt. John Howell, the city’s financial advisor and senior vice president of Houston-based The GMS Group, presented details of the CO refunding to the council and will carry out the transaction in the coming months.

The council then approved an estimated $194,130 bid by T Construction for the final phase of Texas Water Development Board-funded work in the city, centered on a pipe bursting under Robinson. Additional sewer work and manhole raisings will be completed along Hillside Drive to reduce the effects of heavy storms on the city’s infrastructure. The bid was accepted and will be paid for mainly by the city's remaining $182,330 of TWDB funds. The council added an additional $10,000 to their final award for contingencies.

Separate bids totaling $13,800—related to the renovation of bathroom facilities at Marilyn Edgar Park—were also approved by the council June 24. While city staff will complete the renovations themselves, bids were sent out for needed plumbing and electrical materials.

City Council also unanimously endorsed the establishment of a 30 mph speed limit on the Robinson-Woodlands Parkway overpass in both directions within city limits, the listing of surplus city items for sale and five-year lease agreements for two new police department vehicles.