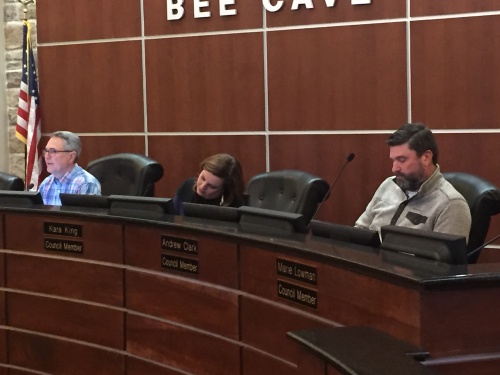 Bee Cave City Council on Jan. 8 called for a May 4 election for three spots on the body.

The May 4 election pertains to council members Marie Lowman, Kara King and Andrew Clark. King has served on City Council since 2013, Lowman has served since 2014 and Clark was appointed in June 2018 to fill the vacancy left by Mayor Monty Parker.

King said she plans to run again for a spot on the council, and Lowman said she will not run again. Clark confirmed Thursday, Jan. 10 he will seek re-election to the body.

Andrea Willott, Bee Cave Planning and Zoning commissioner, said she plans to run for a spot on the council.

The first day to file an application for a place on the ballot is Jan. 17, and the final day is Feb. 15.