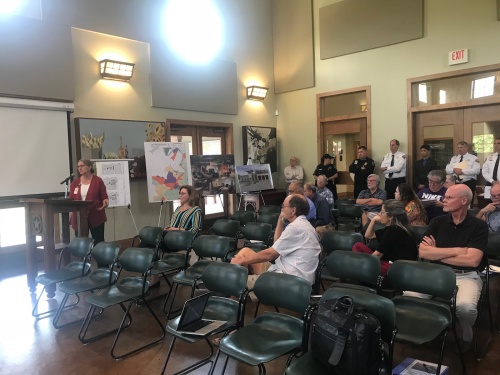 In a presentation Tuesday to Sunset Valley City Council, the Austin Fire Department discussed the possibility of an interlocal agreement to bring a fire and emergency medical service station within the city limits.

Sunset Valley was one of many areas in the South Austin region that has historically suffered from poor response times. The station would be one of five the department was directed to build through a May 24 Austin City Council resolution to improve service.

A station in Sunset Valley would serve areas throughout both the city and the Travis Country neighborhood, AFD Assistant Director Ronnelle Paulsen said at the meeting.

Sunset Valley and AFD have had a service contract in place since 1998 that is up for renewal in 2019, Paulsen said. The city is now paying $500,000 annually for fire service, a cost that is expected to increase by 3 to 5 percent each year as appraised values in the city increase, she said.

“We realize it’s a major part of your budget, providing this service,” she said. “The new station is going to reduce response times in the area for residents and businesses in Sunset Valley, for Travis Country and for accidents on the freeways that come through.”

Paulsen said as part of a potential agreement, Sunset Valley would pay for and construct the new station, which would be built on city-owned property.

The city of Austin would then purchase the station, as well as supply equipment and staff needed for AFD to operate it, she said. Sunset Valley would receive an annual discount in its service agreement with the fire department for a negotiated period of time. Sunset Valley would also maintain ownership of the land itself.

Paulsen said that by building within the Sunset Valley city limits and on a property the department would not have to purchase, the city of Austin could save up to $6 million on the project.

Recent stations built in neighboring communities have cost $5 million-6 million, she said. However, if AFD were forced to purchase land for the station and follow city of Austin codes, the estimated cost would be about $12 million.

“[Sunset Valley] would incur short-term debt, and Austin would incur the long-term debt after the purchase,”Paulsen said. “We would get the same quality of station for a lot less money.”

AFD was considering two Sunset Valley sites for the station, both of which are part of the Uplands Tract, located along the eastbound Hwy. 290 service road and the Burger Center.

The preferred location would be at the corner of Hwy. 290 and Sunset Trail, and the second site would be just beyond the northeast corner of the Burger Center parking lot, near the end of Pillow Road.

Paulsen said the department is actively looking at other sites for the station, including some near Travis Country.

Council directed Sunset Valley staff and AFD to look into specifics of a potential site, including what would be needed for access and if the station would disturb nearby homes. The city could vote to enter into negotiations for an agreement by its Oct. 9 meeting.

Austin City Council's timeline expressed interest in a station being built in the next three years.

“We need to find a suitable site and start contracting [for the project] by January of 2019 in order to meet that three-year timeline [assigned by Austin City Council],” she said.
SHARE THIS STORY